“Kitak dah Subuh kah?” (“Have you prayed Fajr?”), asked some friendly uncles and aunties as I ran past them as they walked from the mosque.

“Aok, lepas azan kamek terus solat” (“Yes I did, I prayed as soon as the adhan finished”), I replied in broken Sarawakian, laced with a noticeable KL accent.

Thanks for the friendly prayer reminder, aunties and uncles! Indeed, performing Fajr (morning prayers) was a breeze during the Kuching Marathon because the route was dotted with a few mosques and surau at almost every 2-3 km along the way. As usual, most half marathon events flag off early before dawn, around 5-5.30a.m. Armed with my usual strategy to pray on-the-go, I ensured that I am cleansed with wudhu (ablutions) before running, tried my best to remain in that cleansed state, and pray as soon as I hear the adhan (calling of prayers) even if I have to pray by the roadside. However, this was not necessary as there were plenty of mosques and surau along the way.

Usually, I would also bring along a waist pack to store an unopened bottle of mineral water (just in case if I have to perform the wudhu again), my phone, energy gel, money, etc. as my running pants had limited pocket space. However, I forgot to pack my waist pack from KL but I remembered that the Azeeza Zip Up I was wearing had a hidden pocket on the right sleeve. Now, with the additional pocket space, I can store my essentials while only holding the water bottle. 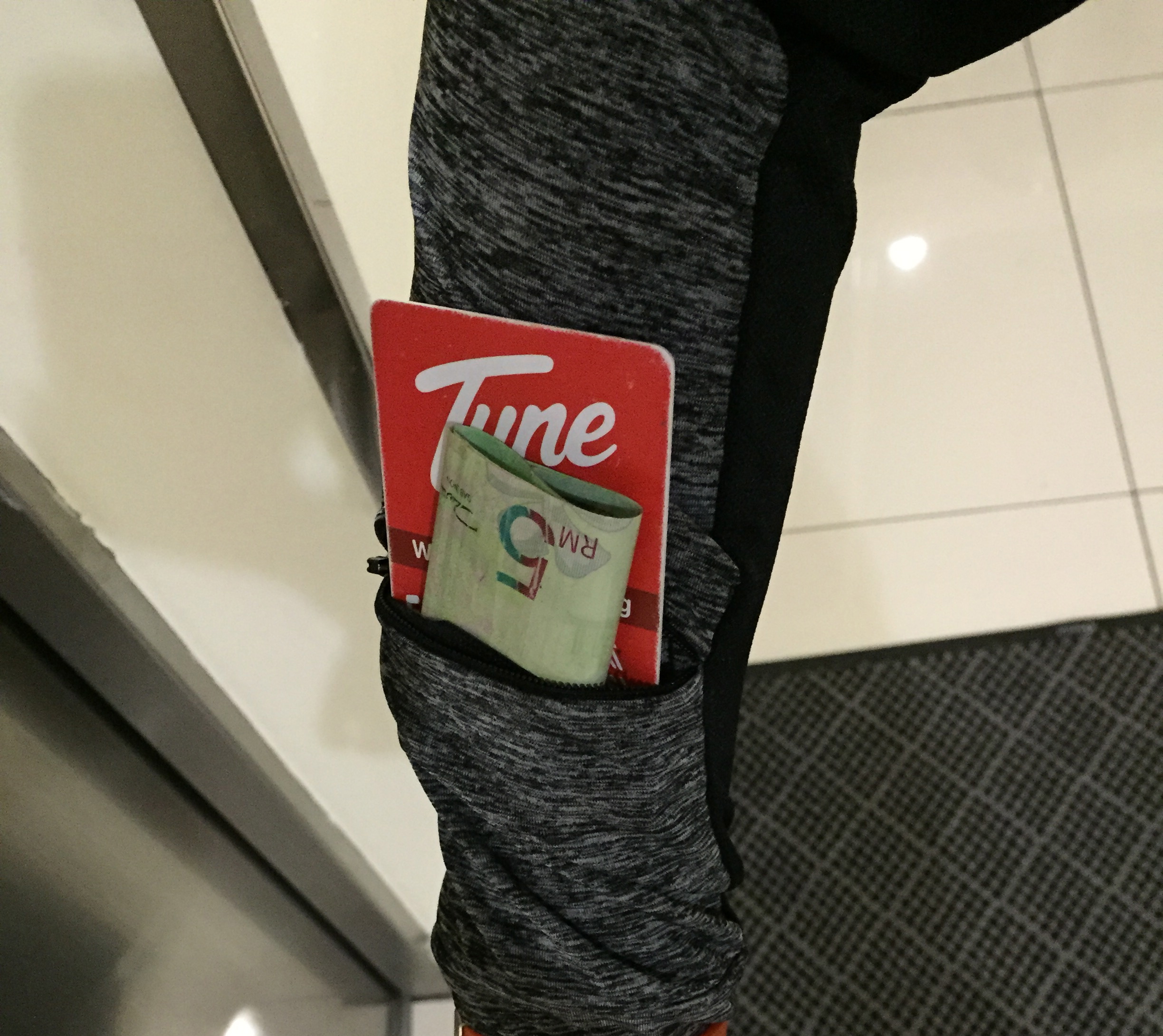 One could not have too many pockets. This cleverly designed wrist pocket was discreet yet spacious enough to fill with some money and cards. 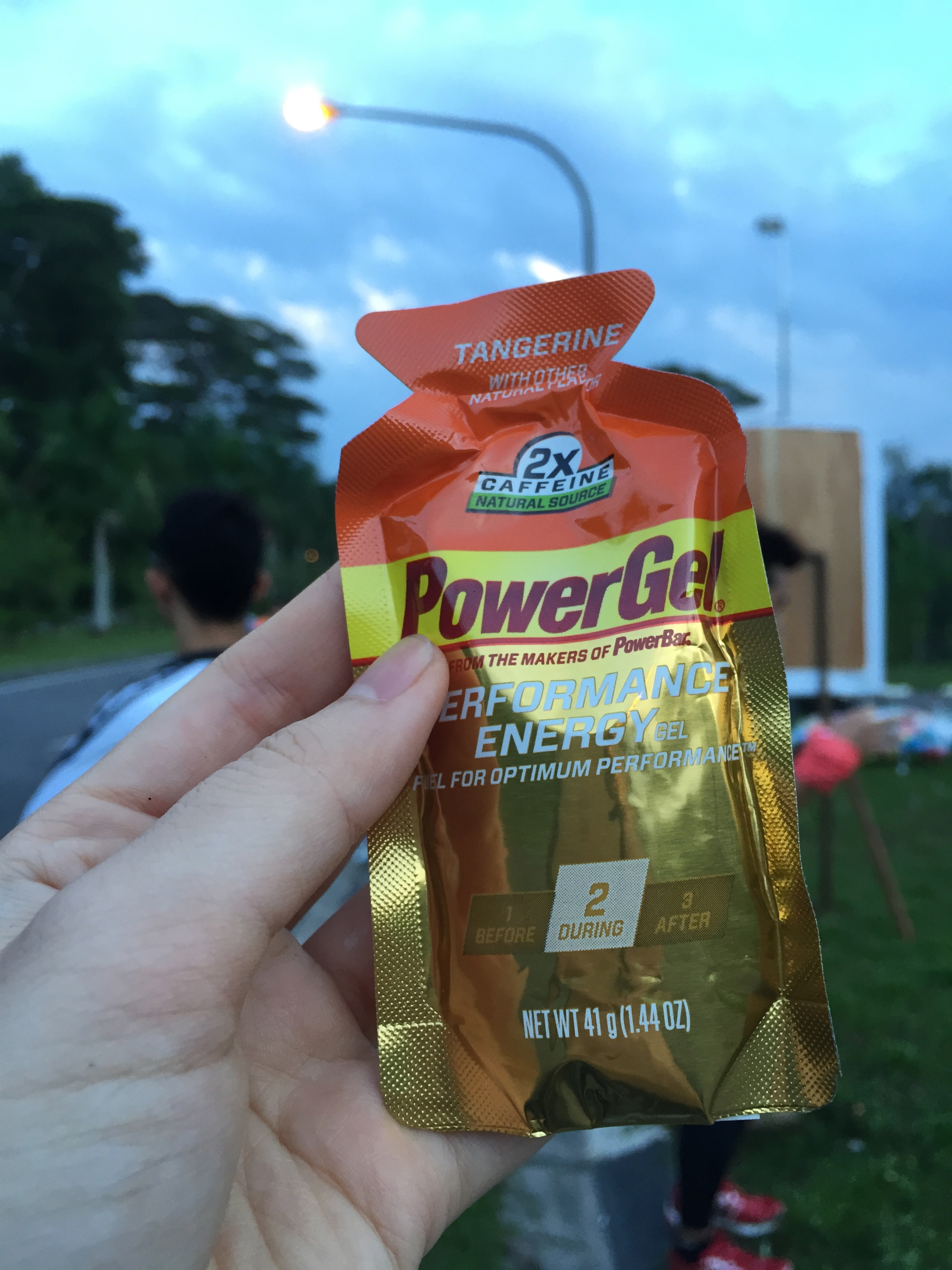 The hidden pocket can be stretched to accommodate a pack of energy gel too. This was the energy gel provided for free at 12KM check point.

We were not sure if the organizers planned this route for the convenience of Muslim runners, or it was just coincidence since we had to pass by some Malay villages so prayers facilities were plenty. However, I appreciated that the organizers displayed an admirable level of racial and religion tolerance that should be an example to other events; I was pleasantly surprised that there was a du’a (short prayer) recital just before we were flagged off, and this is not common at running events. 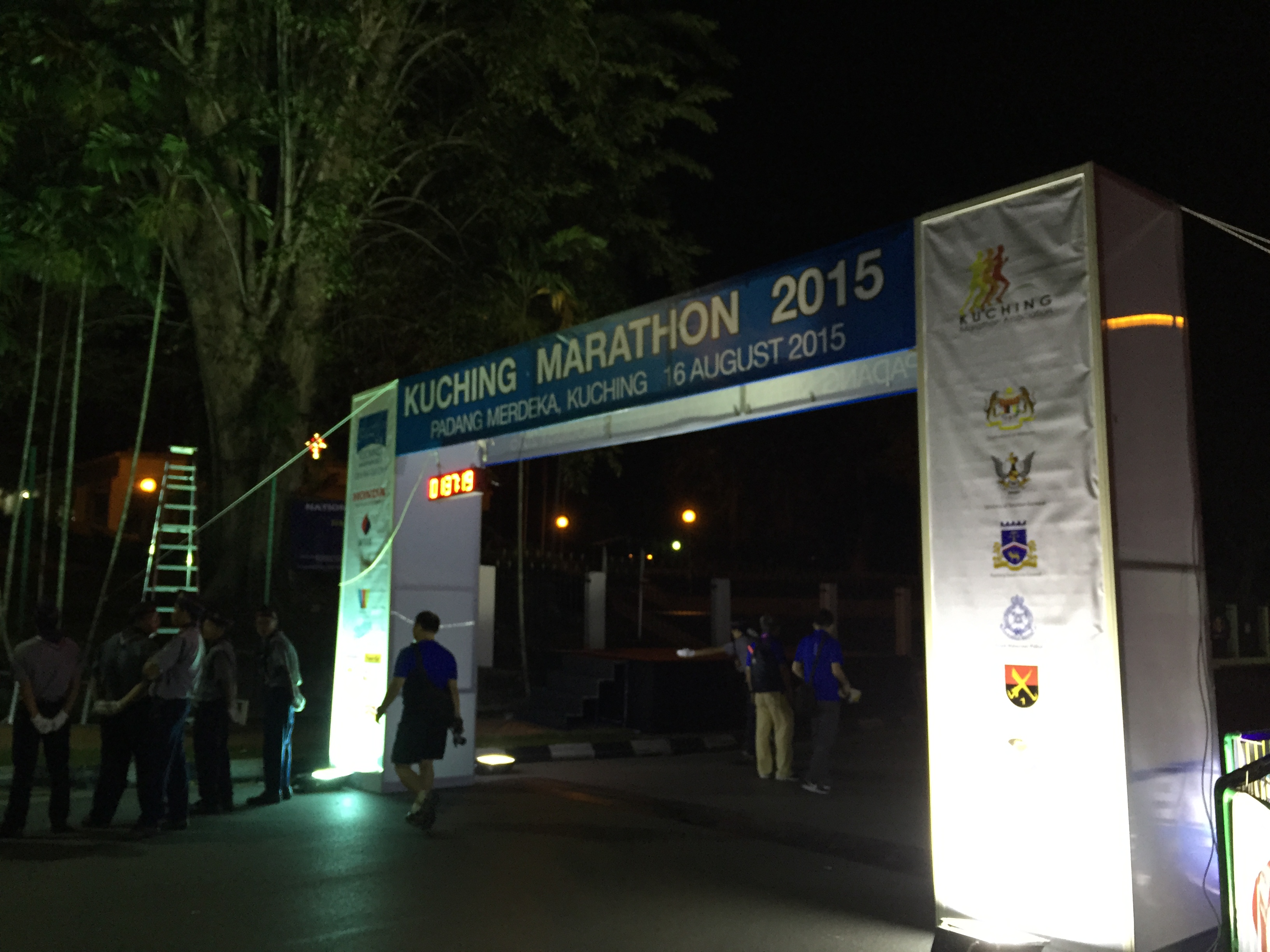 Moment of silence while the Muslims said “Ameen” to the short prayer. Other religions were encouraged to do the same thing too in their own way.

Besides villages, Kuching Marathon would not be complete if we did not run past the iconic giant cat statue (Kuching is literally translated as ‘cat’). There was a long line up to take pictures with this cat statue during the race. We were too focused on sprinting towards the finishing line since it was the final 2KM, so we went back at night to take pictures. 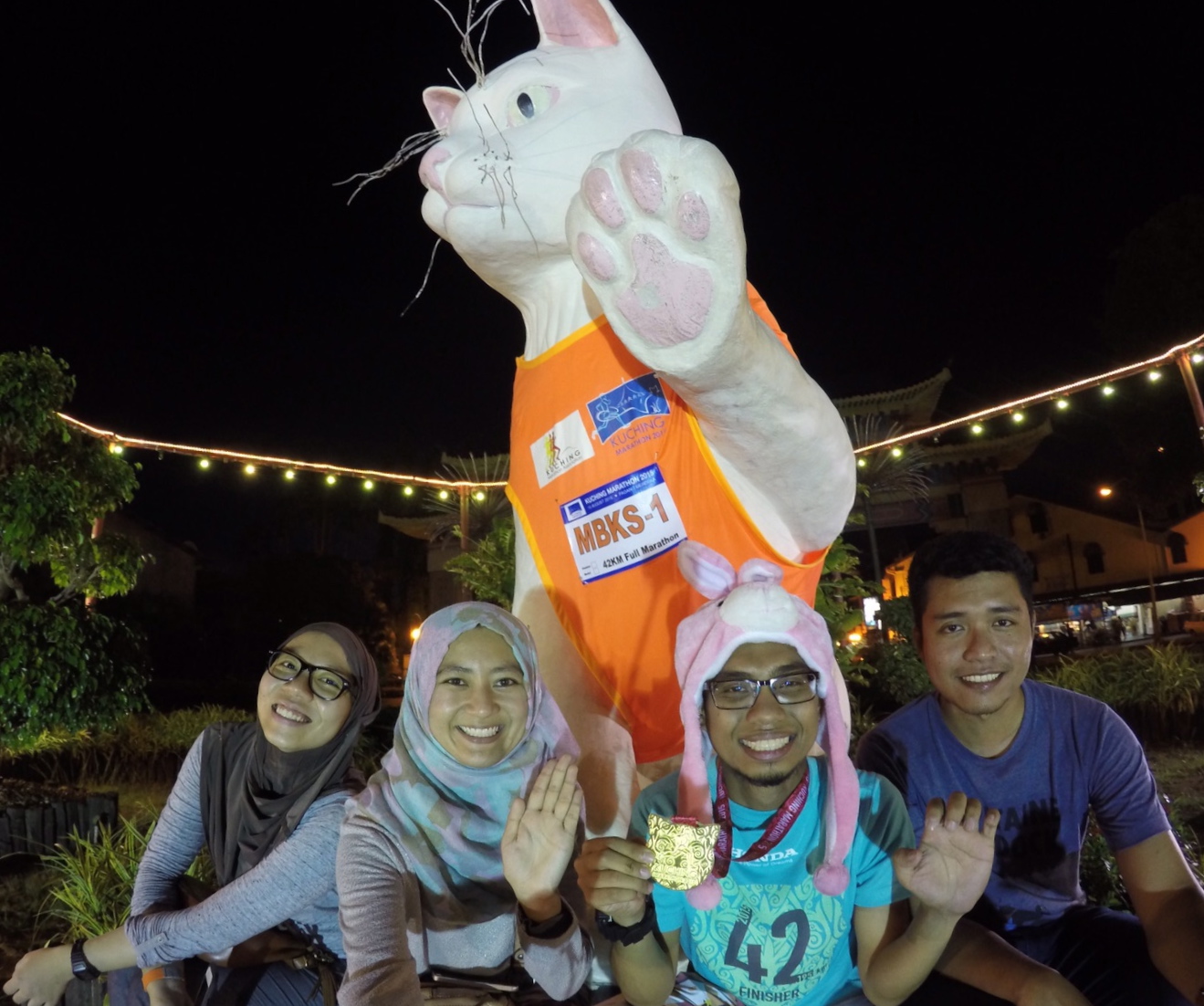 Oh hey cat with vest, did you get a finisher t-shirt too? 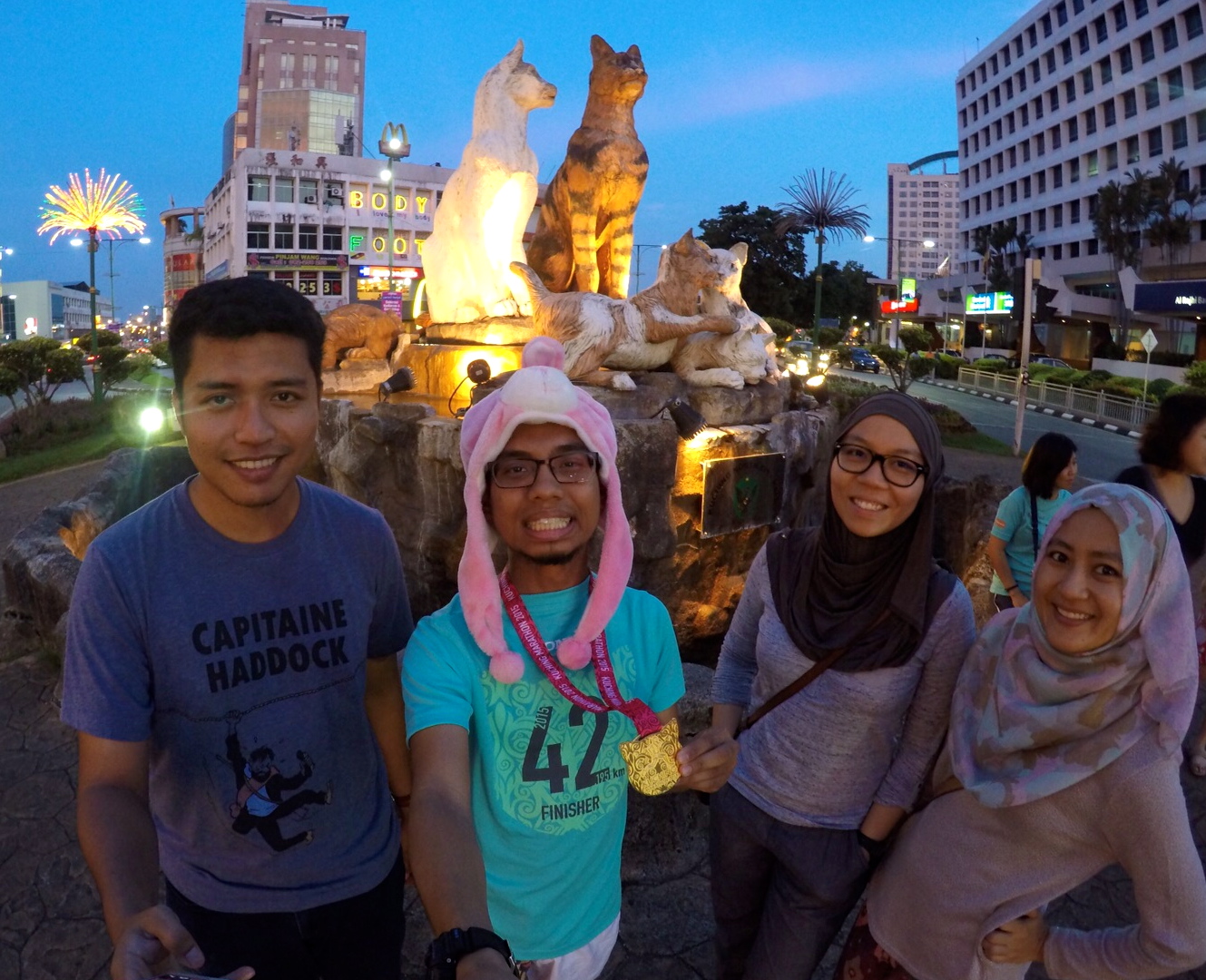 It would be pretty cool if the organizers put vests on this family of cats too!

Overall, this event was well-organized as it met most of the participant’s expectations. We hope that the organizers keep up with the same standards next year, as we plan to return with an even bigger team and run the full marathon. 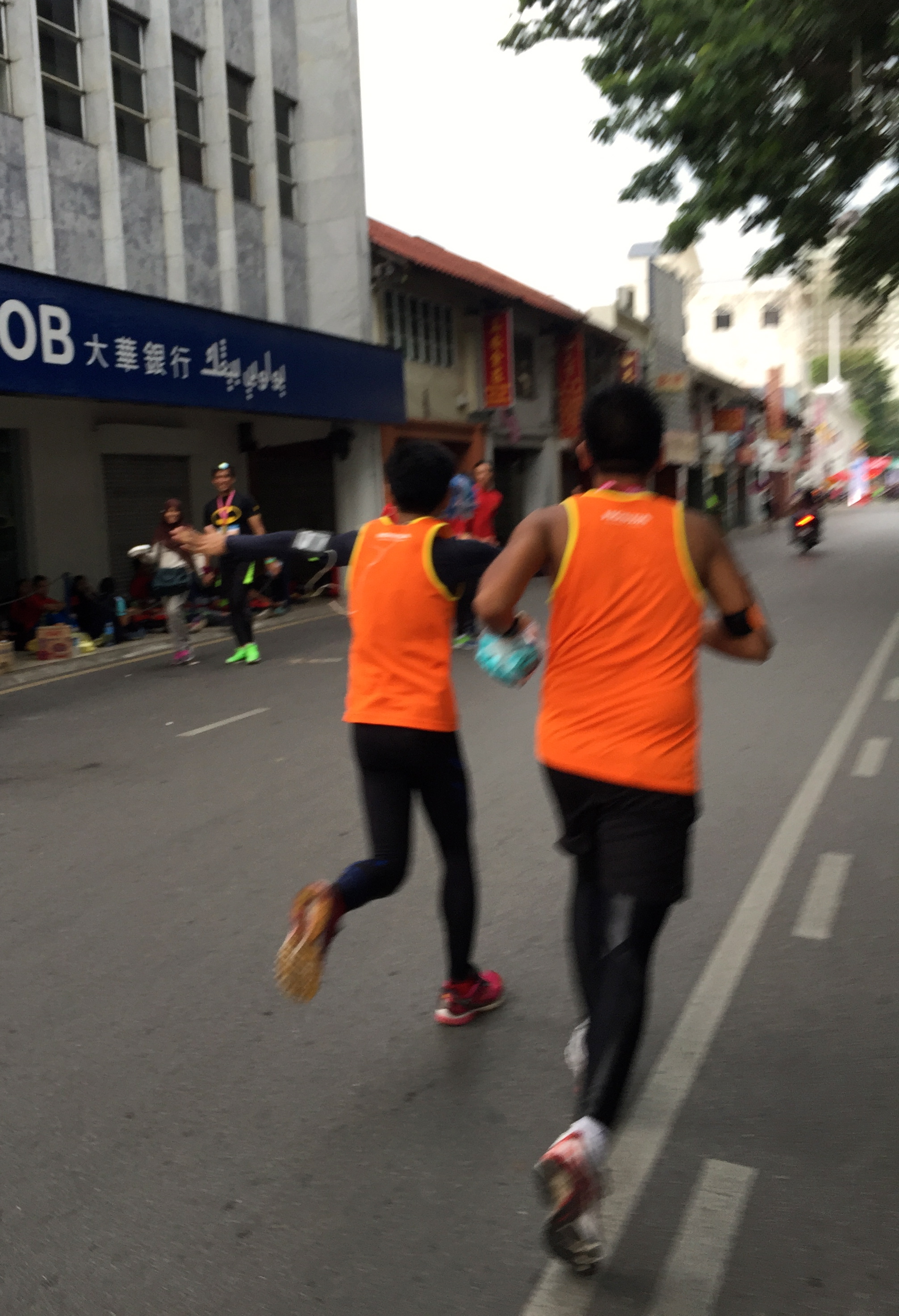 After approximately 6 hours and 36 minutes, we spotted our only team mate who ran a full marathon and sprinted towards the finishing line together. 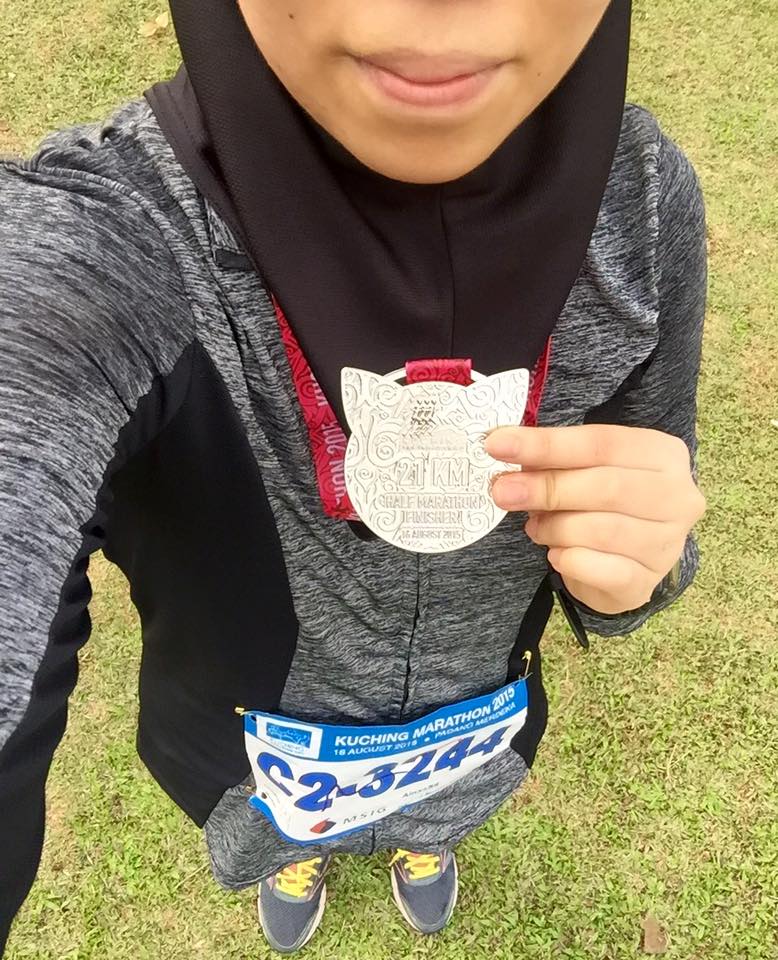 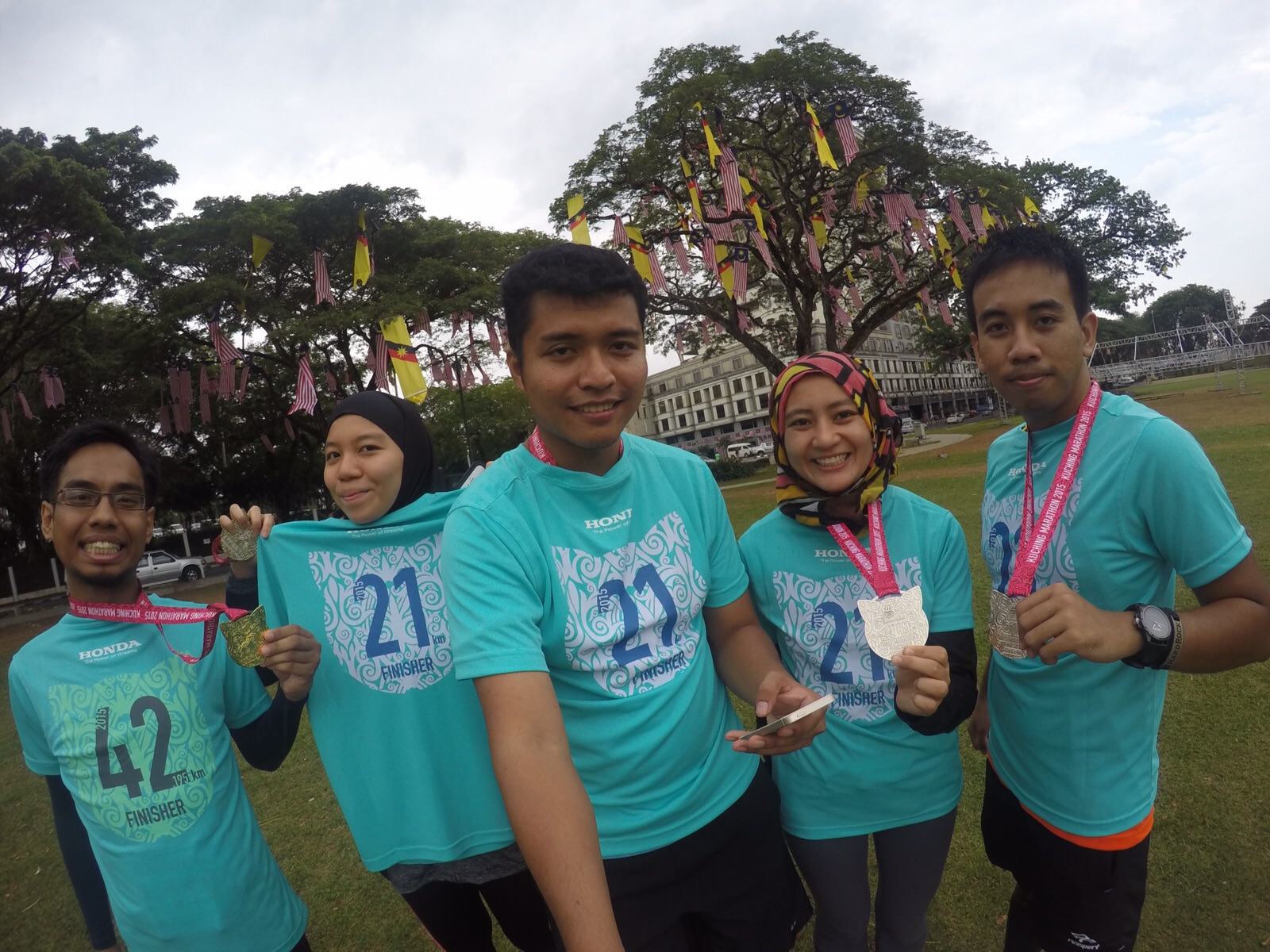 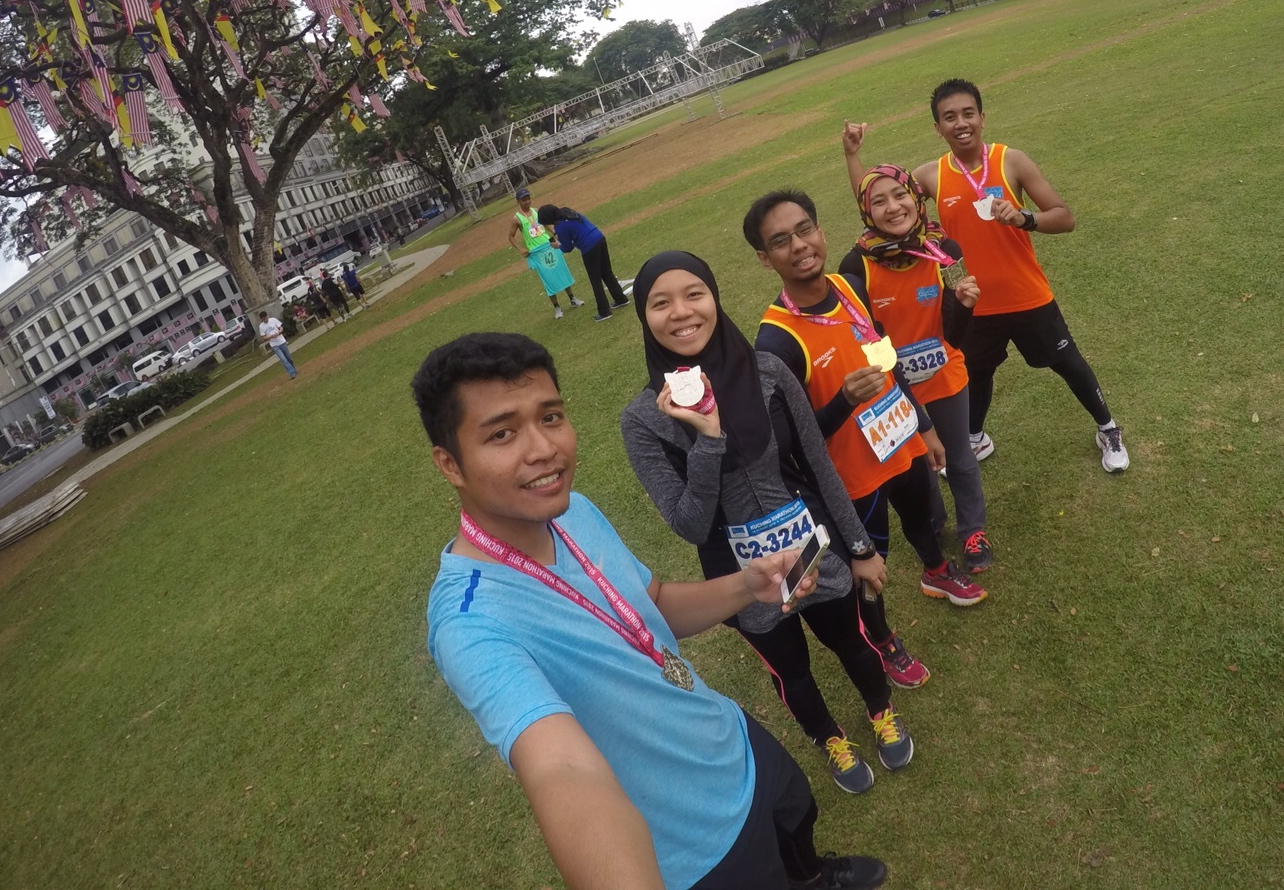