Azlina Idris completed her first half marathon at the Standard Charted Marathon 2014 recently. It was a double accomplishment as she ran with her husband who started running after her. Furthermore, she started running less than a year ago, so a big hand of applause to Azlina & hubby. 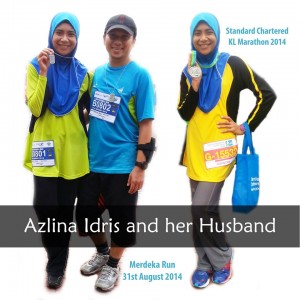 Azlina is an MBA holder and a mother of three growing up kids. After spending more than 13 years working at Telekom Malaysia, she decided to spend more time with her children and take better care of herself. Let’s Be Inspired by her story.

We have been following Azlina and admire her perseverance and training regime and today she shares with us more about her joy of running since 2013. A few months after she left Telekom Malaysia, she started a new schedule – which is running after sending off her kids to school. Her house in Bangi is close to a running track so she gets to run at least 3-4 times a week.

1. What is her training plan?

She does not attend any formal training as most of the training programs are conducted far from where she lives. Therefore, she trains alone or with  husband.  She reads a lot of articles about running and how to improve and she also get tips from her friends and met them via social media. She also does cardio and weight lifting on off-running days.

For the half marathon, she uses a 12-week training program from Runningworld.com. She keeps a training dairy to keep track of her schedule and weekly improvements. Apart from training, she make sure she eats good food; less frying food and more baking or grilling with little or no oil.

2. What makes her run enjoyable?

Most of the time she runs alone, and sometimes with her husband. A fit wife makes a fit husband. That is the case for Azlina as her husband started running a few months after her, and he lost almost 18 kg in 10 months!

Her husband has been her biggest supporter and his participation in all races has brought joy in her interest. Every weekend, they try out new routes and push each other to go further and faster. To her, the time spent on running brought them closer and healthier together.

Her kindle spirits definitely bring good to her husband. Many friends claim her husband look much younger and better looking now. 🙂

Azlina’s children have accepted that their parents are now avid runners. Some weekend mornings, they go to the lake where both her and her husband run while the kids play at the playground. Like her husband, her children are very supportive of her interest in running. Her children always look forward to the goody bags Azlina and her husband bring back from running events.

In September 2014, her children participated in the Kids Giant Run. It was fun but they complained about being tired. Perhaps there need to be more kids fun factors injected into Kids running events.
Azlina’s children will definitely benefit from having fit parents as studies show that children who grow up in families where both parents are physically active are nearly three times more likely to be active than kids whose parents are not active.

4. What is her biggest challenge in running?

Occasionally, she finds it hard to get out and lace up when she runs alone. She overcomes it by reminding herself how much better she feels after a good run first thing in the morning.

5. How does she decides which running event to participate in?

To her as a medal collector, a finisher medal is a MUST. She also looks at the fees and the venue. Different routes and venues excite her as she does not want to go through the same route many times.

6. What does she wear when she runs and why?

Azlina wears Nashata products when she trains and participates in running events. She is a lover of Nashata’s Tops and here is why.

“I love the material of all Nashata products. They’re light, airy and dry fast. The design is very comfortable. It gives me the coverage I need yet doesn’t hinder me from running for hours. During the SCKLM, I was also able to perform Subuh prayers without the need for a telekung.”

The price is very reasonable for the quality of the products. I already have 4 Nashata Tops and a pair of Riada Pants. I would most probably buy more in the future.”, say Azlina.

We are pretty certain Azlina will perform her 1st Full Marathon soon. InsyaAllah 🙂

After all, she was the one who won the Fastest Hijabista Prize at the Cyberjaya Night Marathon in May 2014