Sometimes to break away from the monotony of running I would join other forms of ‘thons’, or whatever that involves long-distance movements on my feet. So last Sunday, I headed to the KL Tower for the KL Towerthon 2015. Just like Viper Challenge, this event has been in my running bucket list for quite some time. It was one of those events that you just had to give a shot to challenge yourself once in a while.

The event stated flag-off at 5am. However, to avoid over-crowding the narrow stairway, the organizers released participants in waves based on category and bib number. 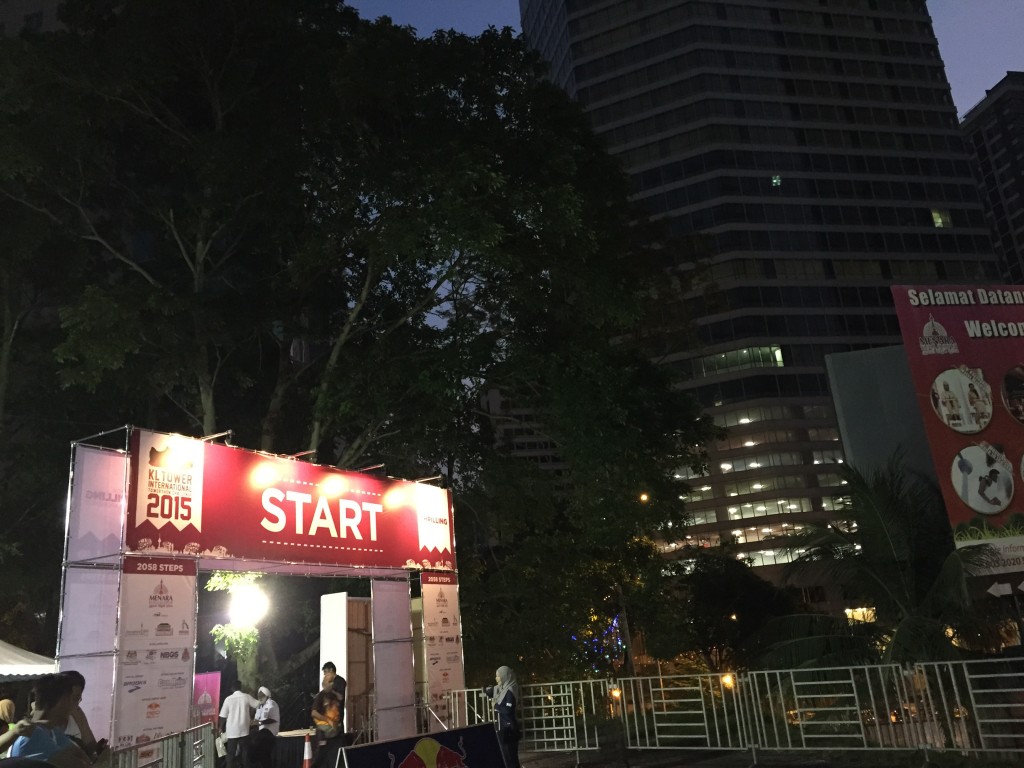 Starting point was a little bit further down the tower. So to get to the tower there is about 1km uphill climb, which was nothing compared to the killer steps later. 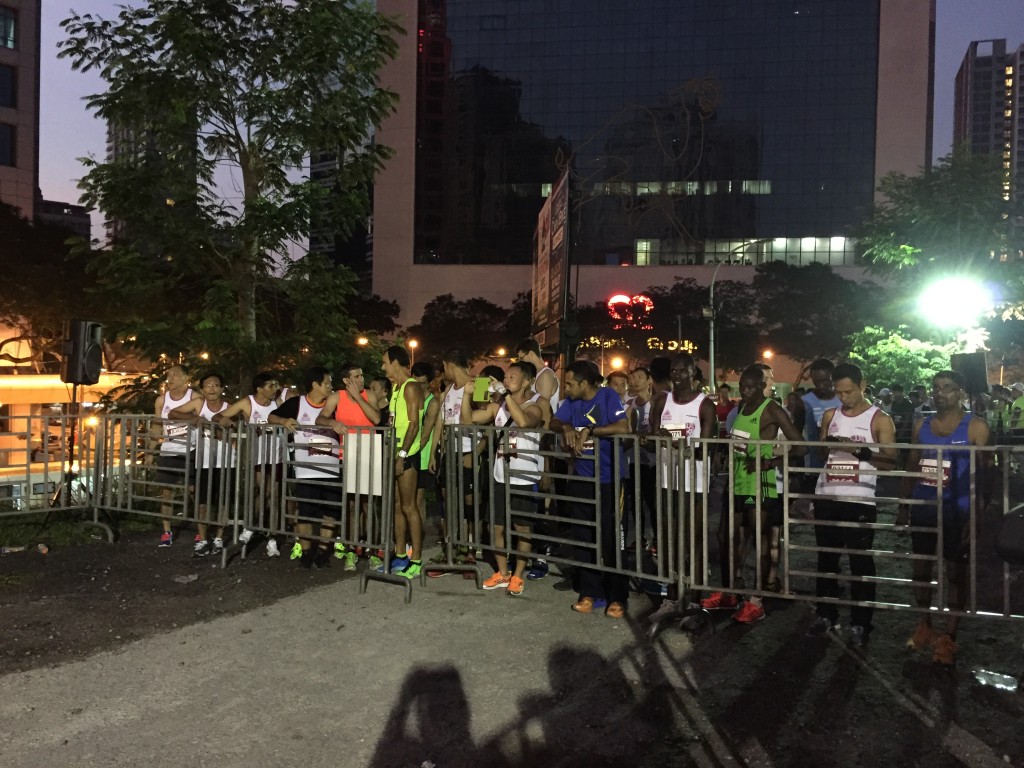 The veteran men category in the holding pen, probably discussing about their grandchildren.

I must admit I did not prepare much for this event. The exact length to be climbed was 421 meters (2058 steps), so I continued my regular running  routine without any additional training specific to this event. But I wish I did! I underestimated several factors such as elevation and the heat. By 1/3 of the height to be scaled I was already sweating buckets and panting like a dog. Plus climbing steps takes a higher toll on the heart rate, so some high-intensity work out training before the race would be helpful. 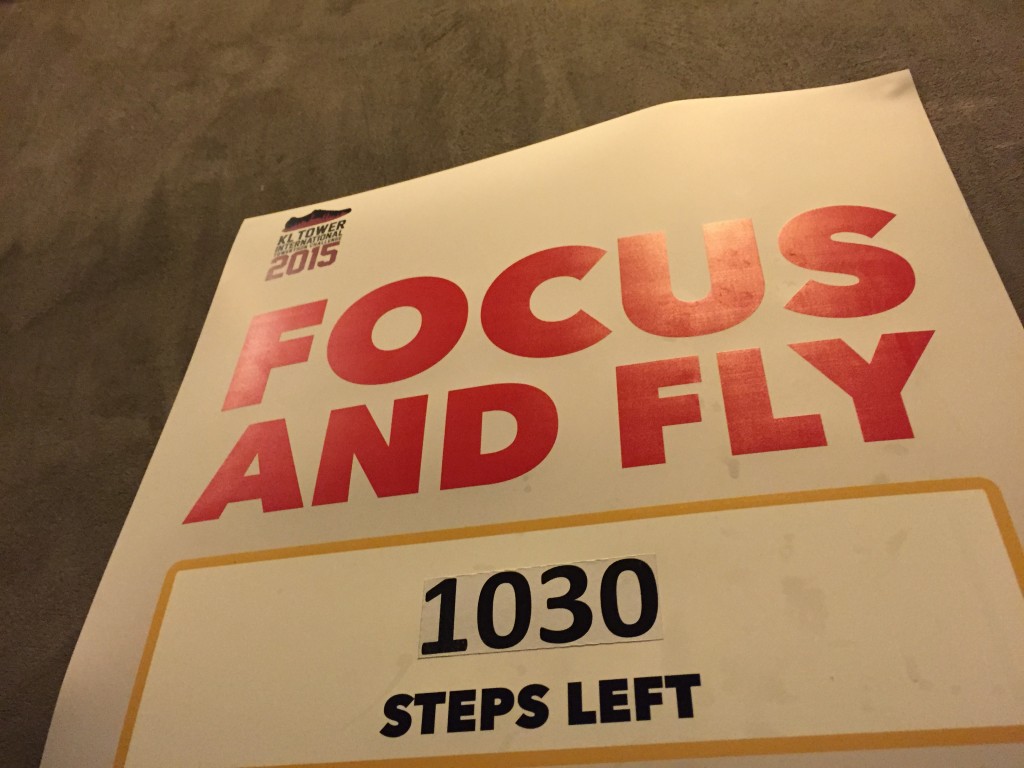 Halfway there. Remember to stop, breathe, and drink up!

The challenge lies in concentration and focusing. Scaling 2058 steps is a mundane task, and unlike running outdoors there is nothing to distract you from the pain or boredom. I don’t usually need music to run because I keep myself entertained by observing my surroundings, but I regretted not bringing my headphones along. I am not claustrophobic, but I felt trapped inside the stairway shaft because there is nothing for me to see except the stairs ahead of me. 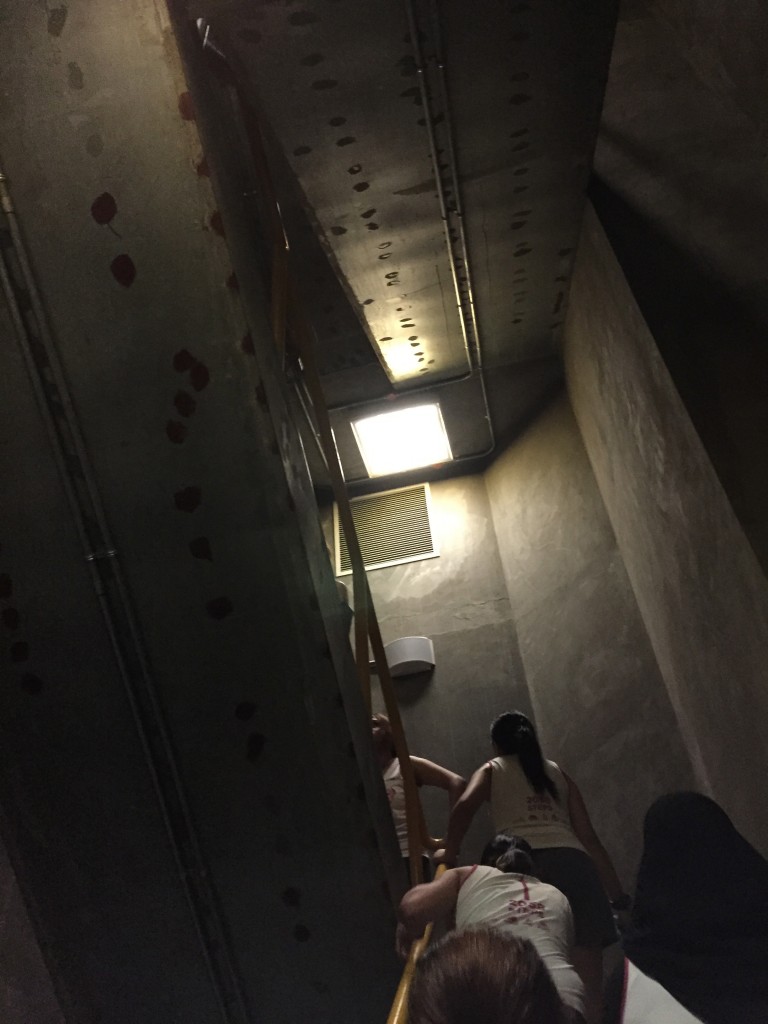 36 minutes later, I finally reached the top of the tower. (Additional info: the world record holder took slightly under 15 minutes to reach the top). Just like scaling a mountain, the rewarding sense of accomplishment overwhelms in the pain and soreness. In the end, you know it is all worth it because you have pushed yourself and in my case, I have done my best to push myself mentally as well. The KL Tower now serves as a reminder; if I can scale that, I can scale over almost anything. 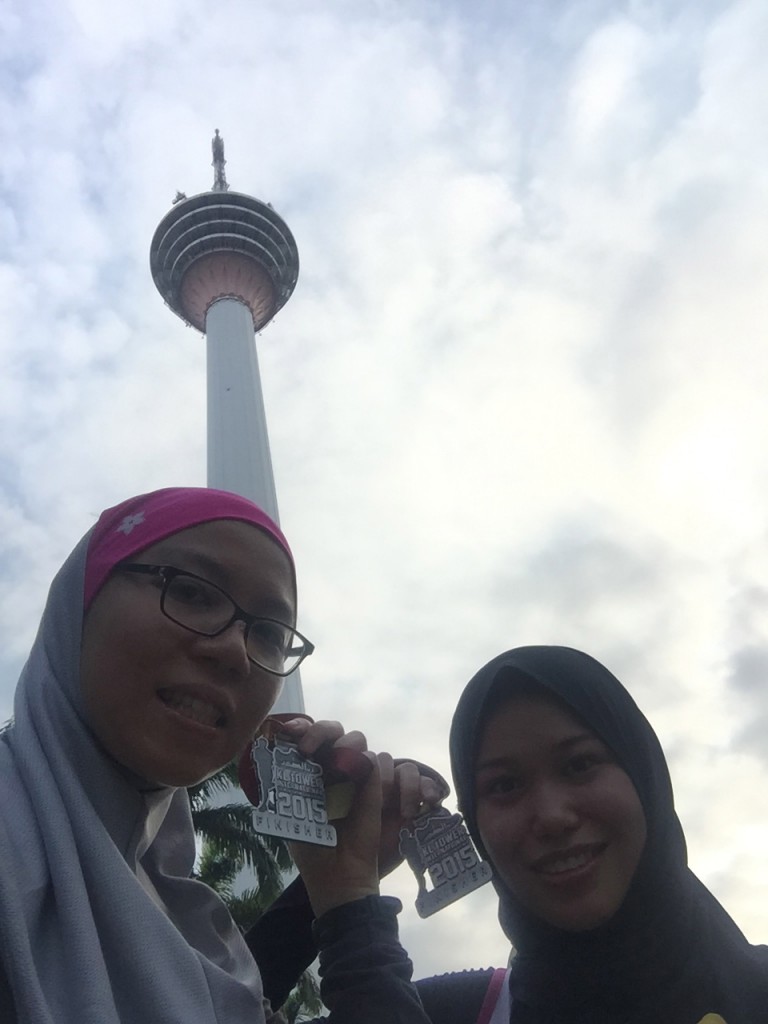 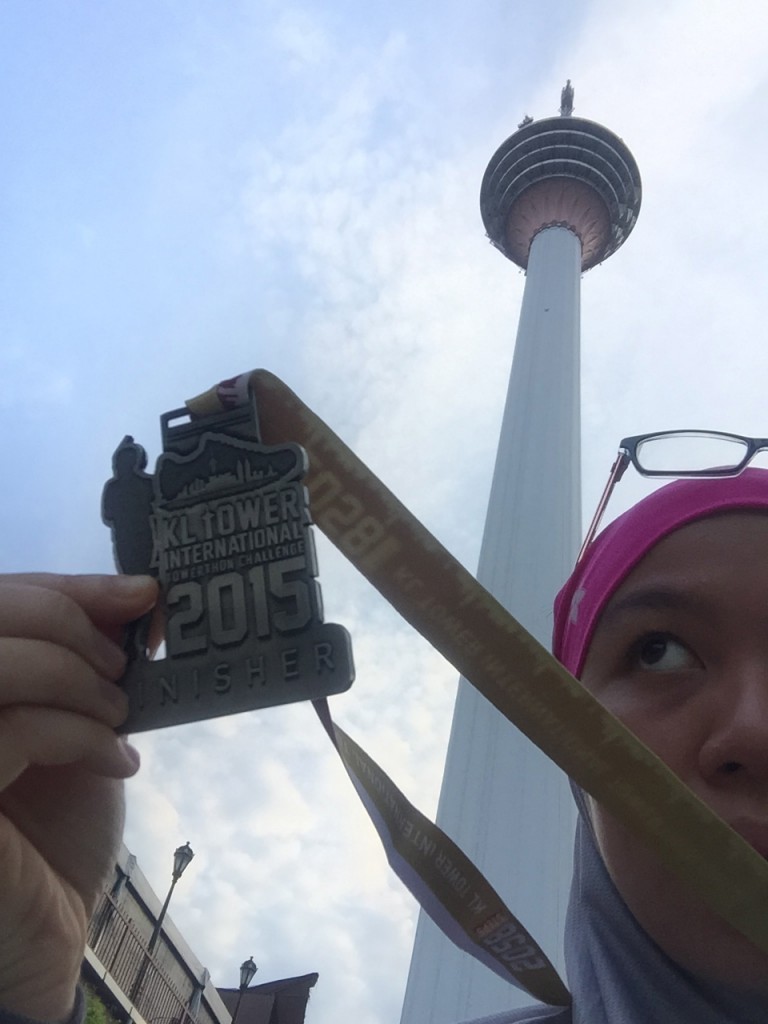 Trust me, the only way to get a decent finisher picture was taking a selfie with the tower. I have never taken so many selfies in an event in my entire life. 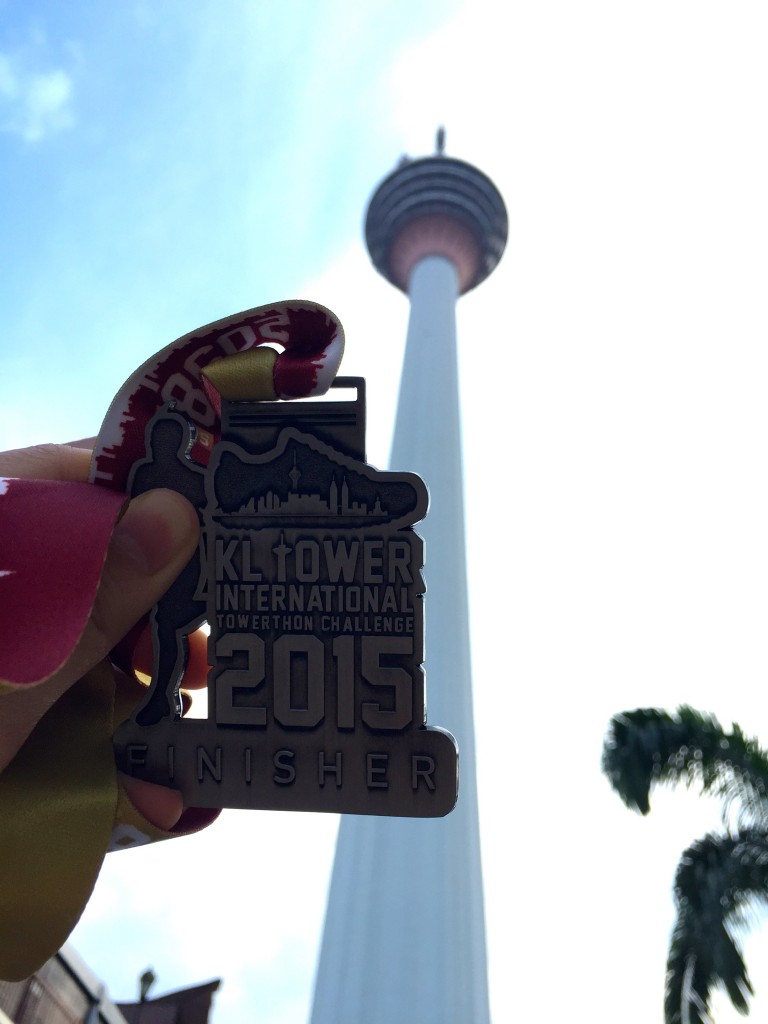 The medal needs a selfie too

P/S: When was the last time you were a tourist in your own backyard? I consider myself born and bred in KL yet I have never seen this side of KL before. Old yet charming. I never knew there was so much to explore from a different perspective. 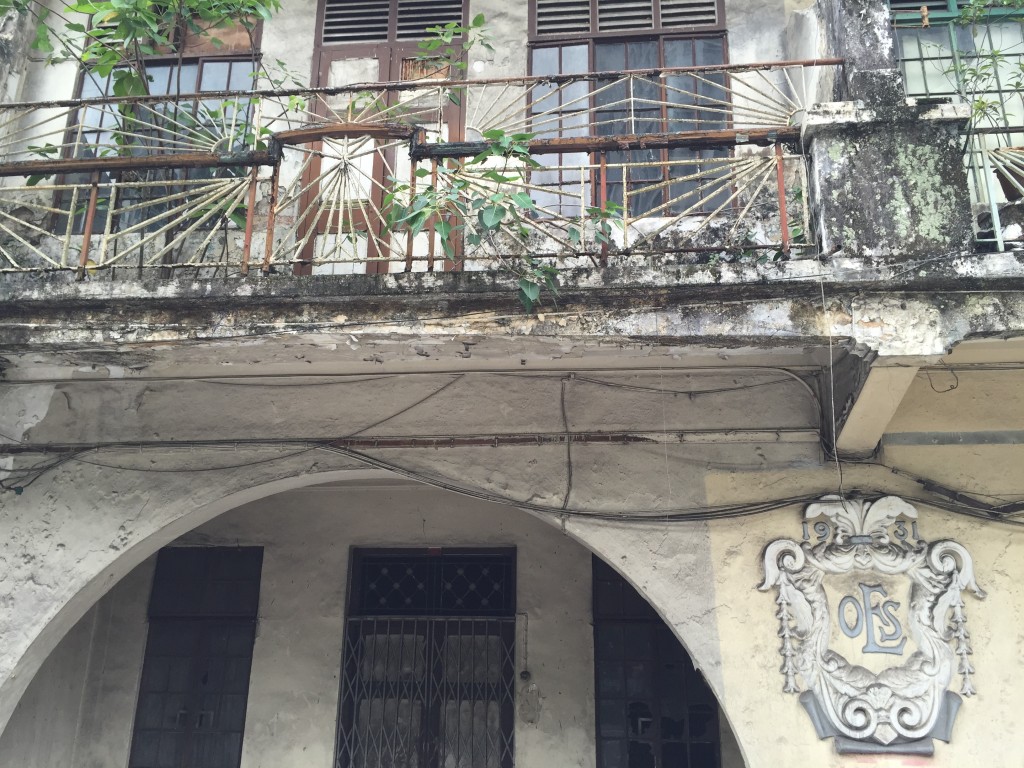