It will take place at iconic Dataran Merdeka  on 28 and 29 September, bringing together 40,000 runners compete in a variety of distances, with the previous year’s title holders all returning to stake their claim once again.

“The Race weekend will see thrilling contests between the defending champions in various categories and the upstarts who will be pushing the incumbents all the way,” said KLSCM Project Director Rainer Biemans, who is also a Director of Dirigo Events, the owner and organiser of KLSCM. “As an added highlight, making his debut in KLSCM will be YB Syed  Saddiq, Minister of Youth and Sports, who will make it the first time a full-fledged Minister has taken part in the Half Marathon category,” added Biemans.

The undisputed “king” in the local marathon scene, Muhaizar Mohamad, will be back to defend his title in the Malaysian Men’s Full Marathon category for an astonishing fifth consecutive time. Muhaizar, who won Malaysia’s first S.E.A. Games medal in the event in the last 44 years in the 2017 KL edition, is also representing Malaysia again in the event at this year’s Games in Manila, Philippines. He is currently the second fastest Malaysian marathoner after national record holder Leo Tan Huong Leong. Leo, who came in third at last year’s KLSCM, will unfortunately not be participating this year due to other commitments. 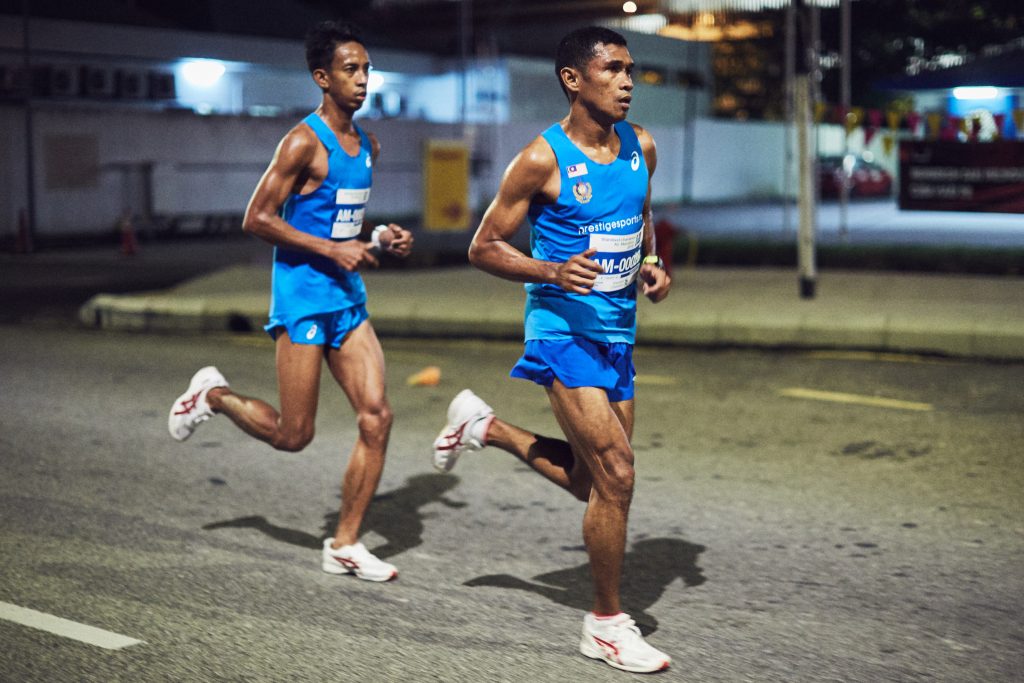 Due to his participation in the Manila S.E.A. Games in November this year however, Muhaizar is not expected to push himself to glory at KLSCM2019 as both events are just two months apart and his priority is representing Malaysia at the Games.

“KLSCM2019 will be my last marathon outing in my preparations for the S.E.A. Games and I do not want to jeopardise my training for that. I still aim to be competitive and hope to defend my KLSCM title as it is an event that is close to my heart after winning it four times in a row. Dirigo Events, the owner and organiser of KLSCM has also been one of my strongest supporters and I want to repay their faith in me by participating again this year,” said Muhaizar.

The main obstacle in the defence of Muhaizar’s title will come in the form of someone well known to him. Nik Fakaruddin, who came in second last year, is a vastly improved runner and is in fact Muhaizar’s compatriot in the Armed Forces and one of his regular training partners. Nik’s advantage this time around would be knowing that there’s nothing preventing him from going all out to bag his first title especially since Muhaizar would be more concerned with the upcoming S.E.A. Games.

In the Full Marathon Open category, two-time consecutive champions Cosmas Matolo Muteti and Elizabeth Chepkanan Rumokol from Kenya will return to defend their Men’s and Women’s tiles respectively. Their aim to win their third consecutive titles in Kuala Lumpur will be put to the test by elite Ethiopian athletes who will be making their debuts at KLSCM. Cosmas will be tested by Victor Kipchirchir who has a personal best of 2:07:39 while Asnakech Mengistu Egigawehu (2:25:50) and Ticzita Terechu Dida (2:28:00) will both give Elizabeth a run for her money in the Women’s FM Open category. 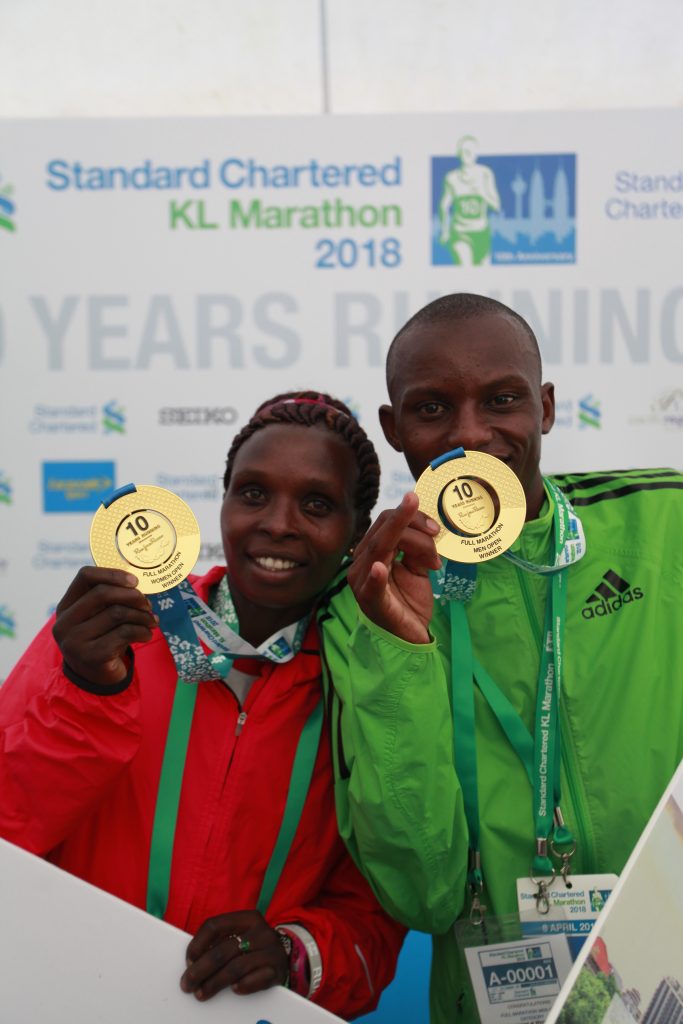 Cosmas believes his success in the past two KLSCMs is due to the similar climatic conditions between his home base in Machakos County in Kenya and Kuala Lumpur so although Victor’s personal best is a pretty fast time, it was probably achieved in a non-humid and cooler climate. “After developing knee and muscle problems after the Singapore marathon last year, I have not participated in any marathons since and my body has been recovering and responding well to my training. I’m happy with my progress and I’m confident of being competitive enough to try and defend my title,” said Cosmas. “While I appreciate the competition from other strong runners, I’m still someone who runs without apprehension as I’m only concerned with my own race. My motto is ‘train hard and the winning will come automatically’ and I am really looking forward to racing in Kuala Lumpur, which has a special place in my heart,” added the champion.

In the Malaysian Women’s FM category, Loh Chooi Fern will be back to defend the title she won last year in 3:18:44 but is expected to better that time as she recorded a personal best sub 3 hour time in the Gold Coast Marathon earlier this year. Nur Amelia Musa, the wife of Nik Fakaruddin, will be her most serious competition in this year’s KLSCM but Loh is relishing the challenge. “Women are getting stronger in marathons and I expect to be pushed hard this year. This is great for the sport as intense but healthy competition can only serve to help us achieve better times,” said Loh.

The darling of the Malaysian Women’s HM category Sheela Samivellu, will be attempting to make it four in a row and it’s hard to see anyone going toe-to-toe with her in this year’s race. Sheela, who is also the national record holder over the distance and the course record holder, has not set any specific targets for this year’s race and just hopes to finish the race successfully. “When I’m in a competition, I regard everyone as competitors and usually don’t target specific people to beat. My ultimate goal is usually to just to run well and finish strongly,” said the modest Sheela.

Apart from the exciting contests in store in the blue-ribbon categories, SCKLM will again see its fair share of inspirational stories from incredible individuals who use the marathon as a springboard to motivate and challenge others to do more with their lives, none more so than Chris Koch. Born without limbs, Chris is a Canadian farmer, athlete, adventurer and motivational speaker who will be attempting to complete his eighth marathon using a special longboard. “This will be my first time in Malaysia and first time attempting a marathon in this sort of hot and humid climate. I’m grateful to the organisers for allowing me to participate in my eighth marathon in the third continent and am looking forward to this particular challenge,” said Koch.

The Kuala Lumpur Standard Chartered Marathon has grown to become the premier distance running event in Malaysia that draws thousands of local and international runners to the country whilst firmly establishing Malaysia in the global running calendar. The 2019 edition will be the largest yet with 40,000 runners taking part, including 1,900 running tourists from 73 countries from around the world, and will once again see sponsorship from Title Sponsor Standard Chartered Bank Malaysia, along with Under Armour, 100 Plus, Seiko, Jaybird, Pacific Regency, Banana Boat and TudungPeople.

For more information and updates on KLSCM, please visit: