My venture to swim with the majestic blue whale sharks was the best thing that ever happened in my life. I assure you, you won’t have any regrets in this trip.

Swimming with the Whale Sharks

It was on the 23rd of December when we got into our hotel located by the seashore in Oslob. Oslob is on the east side of Cebu Island. We were foretold that the Swim with the Blue Whale Shark tickets had to be purchased by an agent from the hotel before midnight. This was to reduce traffic on the next day, most of the tourists come early to the center to get tickets for the boats, therefore it was important for us to get the early boat tickets. No one of course would want to penetrate through the hubbub and deal with the pandemonium of noise there. We paid before hand before that evening, and we were briefed that the shuttle would arrive early in the morning at 5 am.

The next morning, we hopped on the shuttle and arrived at the Blue Whale Shark Center in about 5 minutes. By the time we arrived, there was already a long queue. I was dressed in Nashata Sleeveless Body suit and  Nashata Red Heather Top. My mom was dressed in Nashata Sibaha. The body suits provided us with great support and the products did not slip or move about during drastic movements. Upon waiting for the briefing session provided by the staffs, a few salesmen walked around, promoting the waterproof phone cases. I purchased one because I wanted to record the experience in my phone. Hence, they also explained that there were GoPro devices up for rent. We took that too. 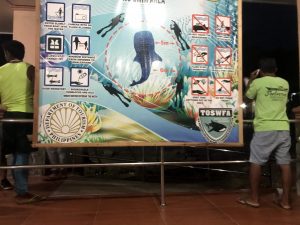 After a few moments, the staff conducted her briefing session using a small mic and speaker, it was fairly loud but the crowd was really loud. The staff explained that all swimmers must keep a distance of 5 meters away from the Whale Sharks. It was also compulsory for all swimmers to wear the life vest at all times. She also strictly warned us to not touch the fish. As soon as the briefing session ended, we were escorted to the second boat, luckily we were the first few to jump in the water. Why? This is because the early birds would witness the feeding time of the Whale Sharks up close ! 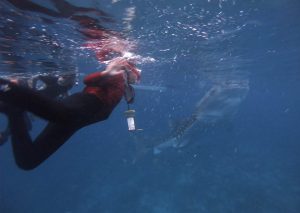 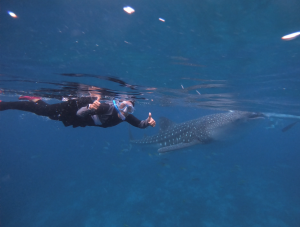 I was extremely shocked to see the whales  at a surprisingly low water level. The water depth was approximately about 15 meters deep. The Blue Whale Sharks would come up close to the shore to be fed, that was incredible ! They were super friendly too, despite the bountiful amount of humans swimming and circulating them, they were very calm. As I dropped my feet into the water, and lowered my head to see the whale shark, I was amazed. They were so beautiful, each individual whale own their own pretty white spots. From the upside view, I could see their shark-like fins that were actually pretty scary. However, from the lower view, they were as calming as dolphins. Their large sized mouths were like vacuums. They did not have any teeth or such, they only had a big mouth that would suck anything in front of them. 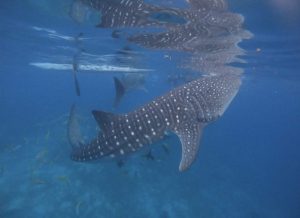 Shot taken from the GoPro

Swimming with them for the first time was actually really terrifying. Based on movies and documentaries, the whale is enormous and since it belongs to the shark family, sharks are dangerous animals too. Essentially, I was awestruck when there were no security or life guards provided. Was it safe? What if it tries to swallow me? However, none of that happened, they were perfectly calm and friendly. They had been there for a while and supposedly, they know their whereabouts pretty well. Here is a fact, the swimmers do not need to move around too much to avoid contact with the whale, because the whale would make its way around you. Conversely, the whales do have a blind spot located right in front of their head. This is because their eyes are situated by the sides of their heads. One of the boatmen rendered his assistance to videotape us using the rented GoPro. He was pretty skilled in taking the videos as the outcome was spectacular !

After a good 20 minutes, the boatmen demanded us to get out from the water to return to the deck. The whales did not stay for long, therefore to ensure all the tourists present get the chance to swim with the whales, the boatmen must be in complete control of the flow. As soon as we arrived the shore, an army of tourists were already flushing into the empty boats. I was really glad we had gone early to swim with the whales. After that, I went to the GoPro rent shop to alter the video and pictures into my mobile phone. It took a while for me to do that because the video and pictures were  in large files and ate up most of my storage. Therefore, to all future tourists, please ensure you have a large empty storage in your phone or laptop if you wish to rent the GoPro! After the transfer was completed, I took a peep at the videos and I was very astonished by the quality. It was amazing, I definitely recommend you to get the rented GoPro or bring one from home, it would be a great help !

That sums up my venture to swim with the Blue Whale Shark in Oslob, Philippines. It was one of the best moments in my life, I felt so happy that i wanted to swim with them again !