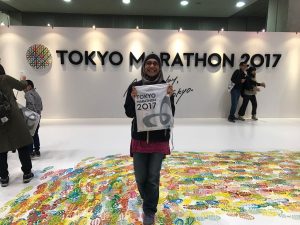 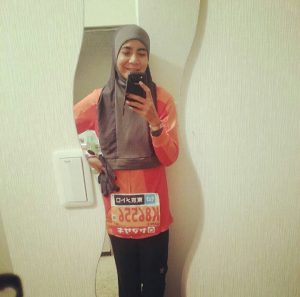 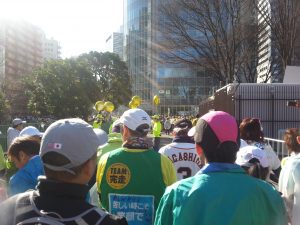 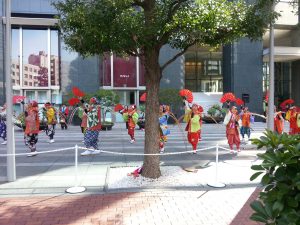 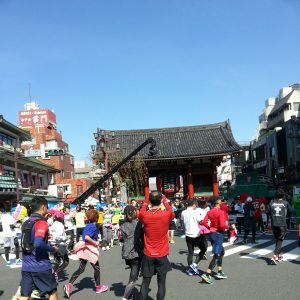 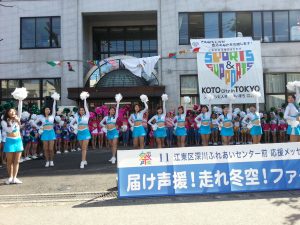 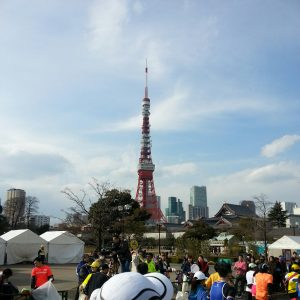 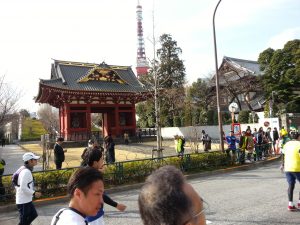 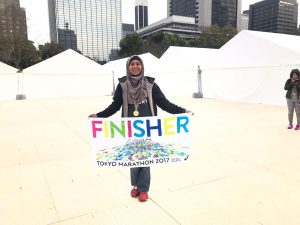 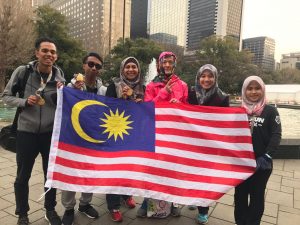 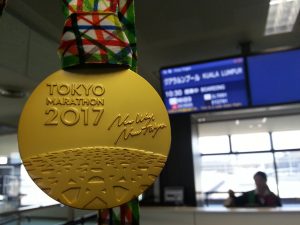 3 months after my last Full Marathon (Kuching Marathon) in August, I came back again for my 11th Full Marathon, this time at the Putrajaya Night Marathon (PNM). The PNM was my first time running FM late evening at 8pm. All the FM that I’ve joined previously started pass midnight 12.30am – 2.00am.

Why was it a concern to me, whether it started late evening or pass midnight? A late evening run is not a good idea as the cortisol level in our body is reduced when it approaches our usual bed time, and it will be maximised after we wake up early morning. Cortisol is a stress hormone that function for catabolic reaction – it increases the glucose concentration in the blood to make more energy readily available to the muscles. So, for running, we need more cortisol right?

And the drama began… 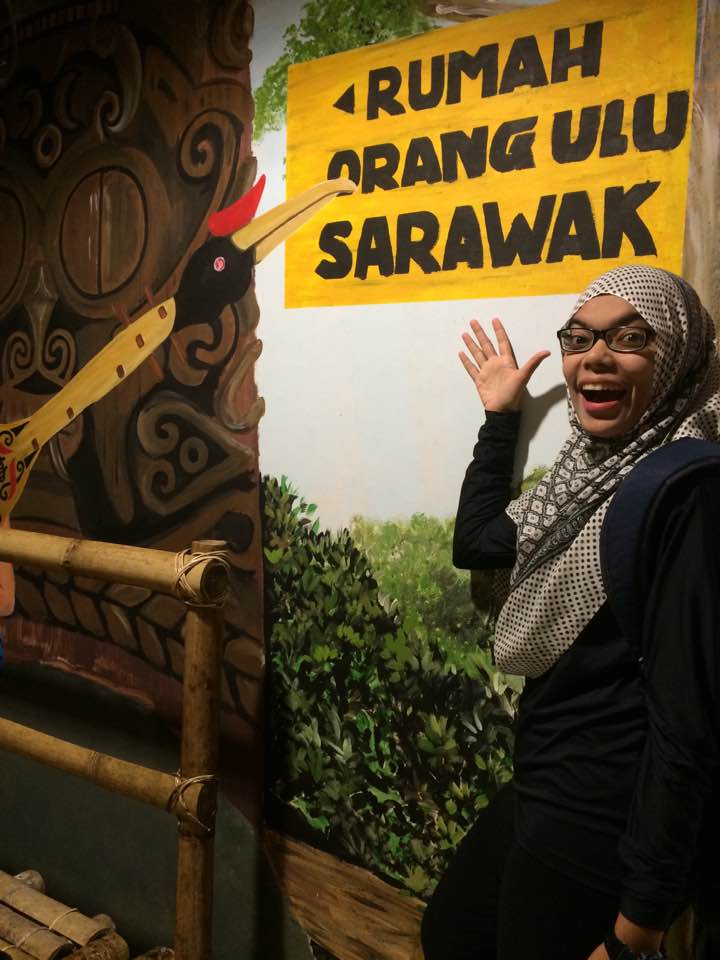 After I finished my Obstetrics and Gynaecology EOP Examination, I flew from Kuching to Kuala Lumpur for PNM. It becomes habitual for me to run a Full Marathon after the exams as a reward for all the struggles and stress I faced through. And yes!, I’d rather run hundreds of kilometres for one night compared to sitting for exams which I do not know what case will I get. Hahaha..;)

Putrajaya Night Marathon was previously known as BSN Putrajaya Night Marathon. Like other major races, there were 42km, 21km, 10km, and 5km categories. My category was 42km Women Open. A friend once said, “She is not Nahsuhah, if she joins a race below  42km.” hahaha,..yup! I love full marathon very much. I hate going back to Kuching without blister and muscle sore,..yeah! Pain is addictive! 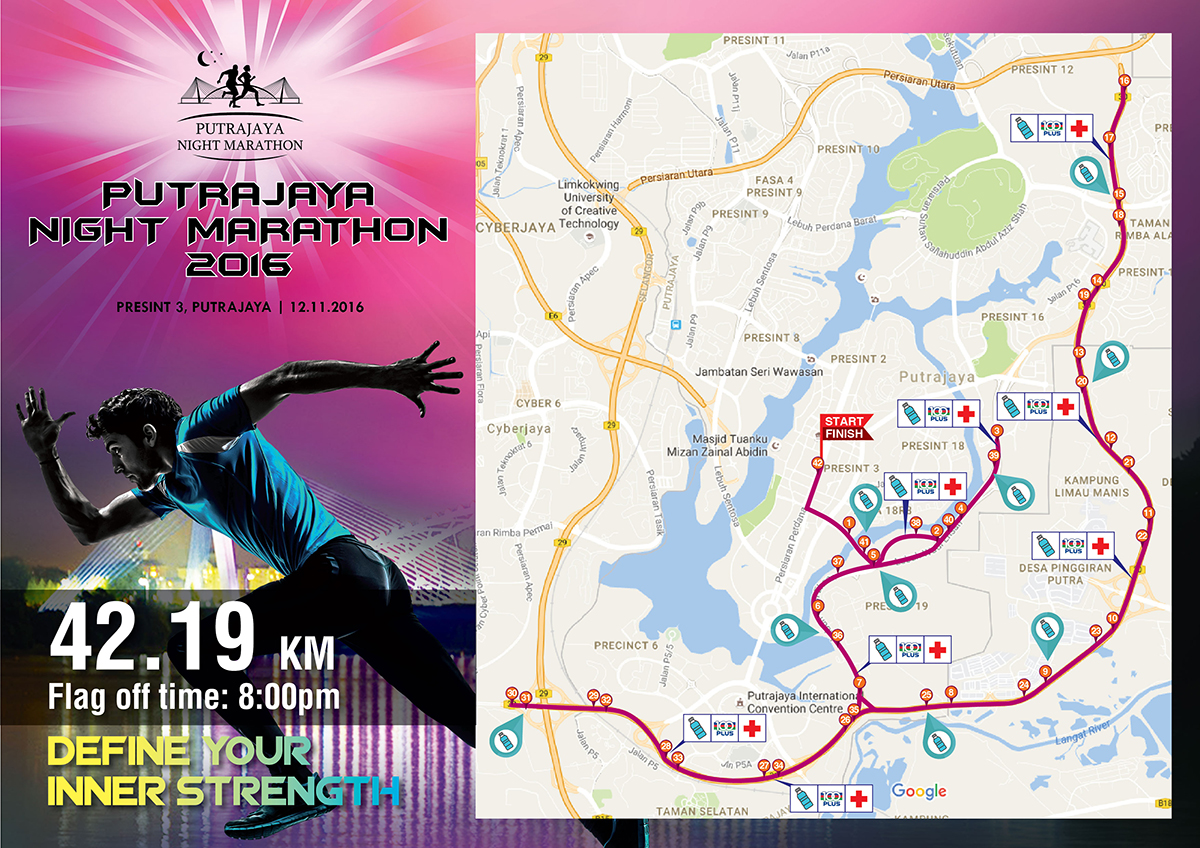 Look at the route, guys! Such a longgggg way,..and we had to turned back at the same route..and passed by those dash Kenyan…So torturing!

The event started at 8pm with 42km category. It was drizzling for the first 30 minutes after flag off and the road was wet. I started with slow pace; my first 10km was about 1 hour and 15 minutes. And yes, that was slow. Usually, my 10km is about 1 hour. The route was all the way,… along the highway in Putrajaya. Such never ending, hilly route and it really challenged my mental and physical state.

My next 10km was even slower as I approached the flyovers and hilly highway. People around me started to walk and it tempted me too. I brisked walk  uphill and run at a slow pace after that. I was doing 2 hours 35 minutes for the first 21km. 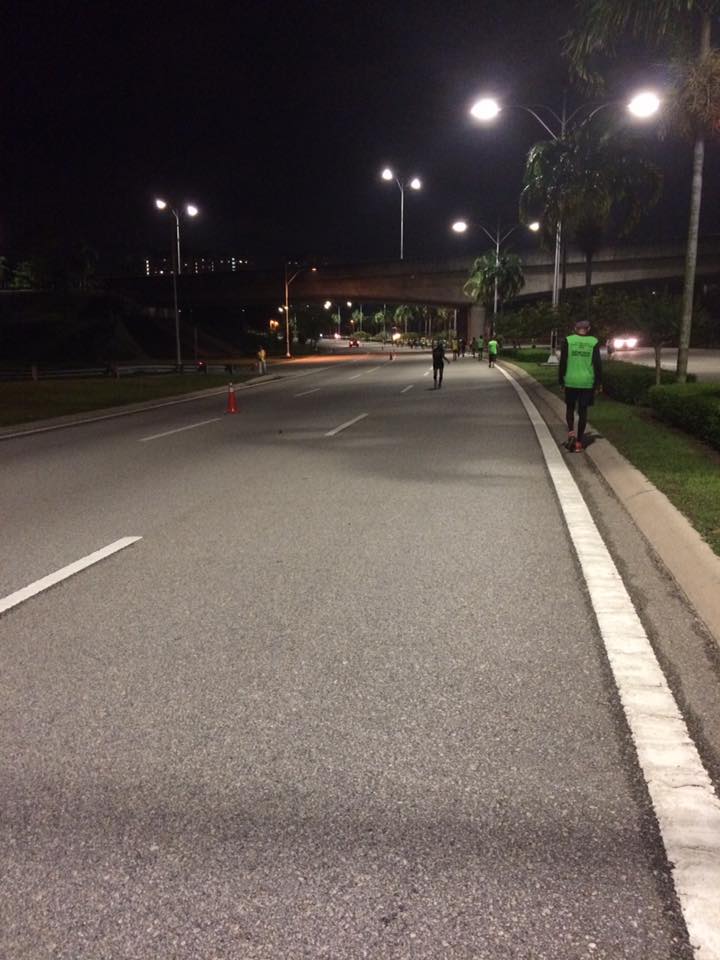 Am I right? It did looked like never ending, ..and let’s run without thinking where will it lead to…but, I can’t!

When those Kenyan runners started to passed by us at the U turn, and I was just too far away from them, and their strike was like,.. full of energy and effortless, with great posture, they even don’t stopped at the water station,.. I just feel like, I’m a small stupid tortoise, with short heavy legs, trying to finish this crazy race. Nah! I pulled myself back together immediately. I was not competing with them, I was competing with myself who really wanted to leisure walk throughout the route.  Glad I didn’t though. 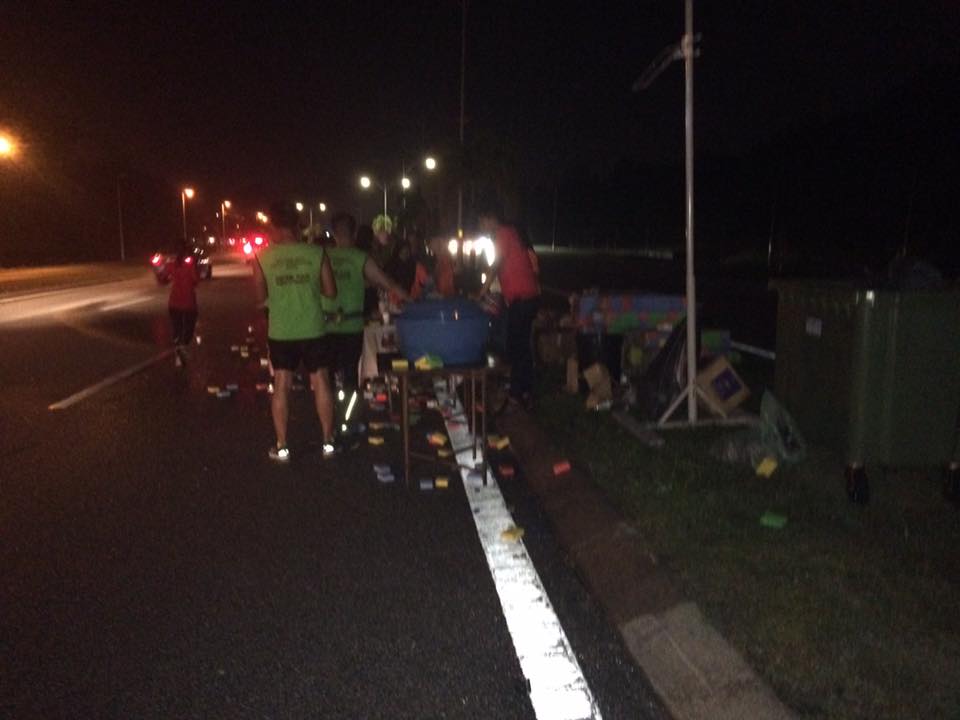 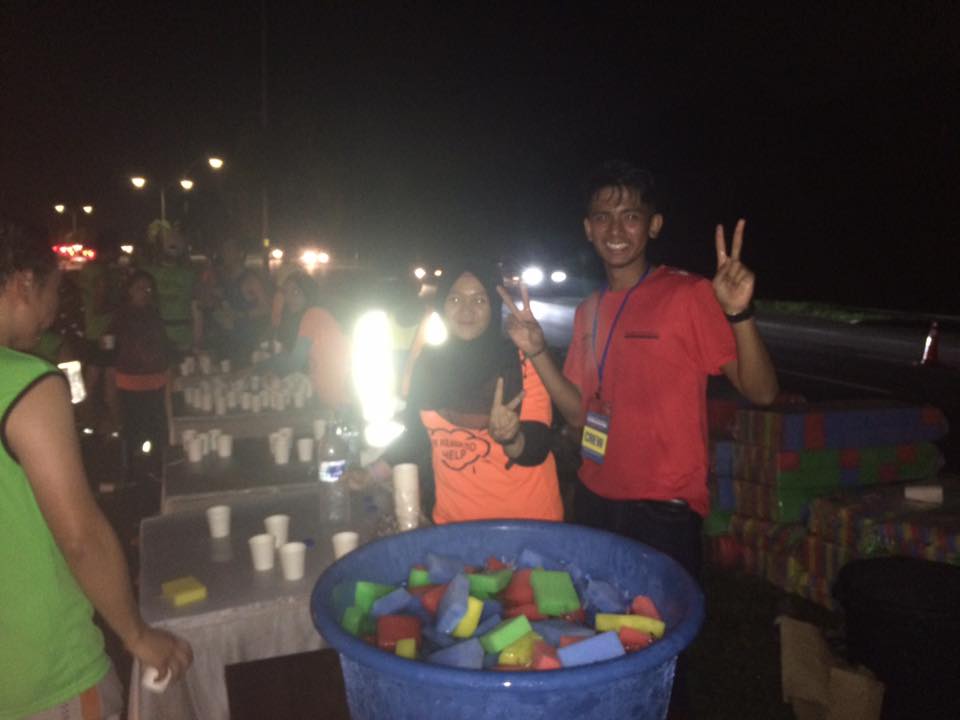 Thank you guys for cheering us up and the support …If I were you, I would be back for a good sleep..teheeee 😉

My motivation was the water stations. I would keep running and sometimes walking (yes,very fast) till I reach the next water station. That night, it was hot and humid. I drank a lot of water and sweat a lot too. It felt like running during the day except no sun. 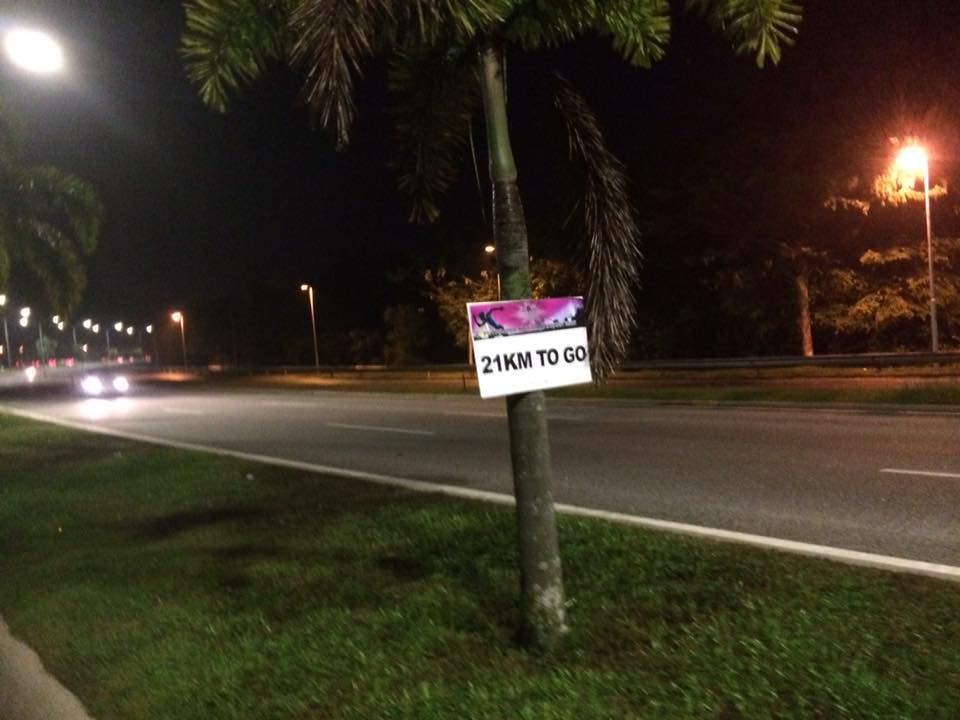 The first 21km was a crazy long run, until I started to passed by the ‘teens’ numbers; 19km, 18km,etc..I was so happy. I bet everyone felt the same, right? Heee.. 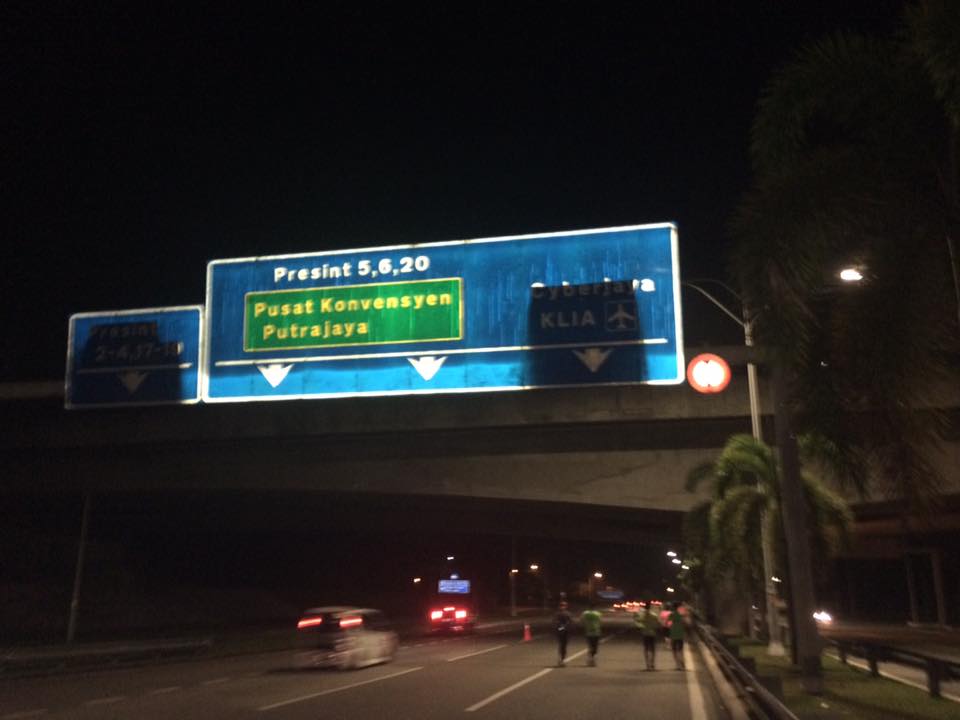 I wish I could run to the airport and take a flight to Kuching, and….the race suddenly ENDed! Pheww..

I admitted having lack of training prior to this event. I always have a short run everyday, about 5km per day which is not enough if you want to prepare for a Full Marathon. Supposedly I had to do a session of 20 to 30km Long,Slow Distance (LSD) a week before the event but I was not able to as I was busy with exams. 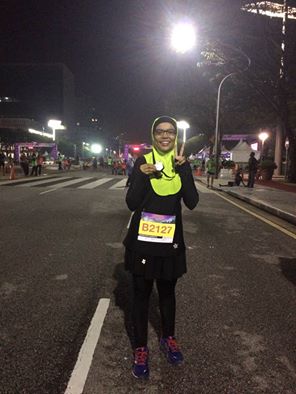 Afterall, I finished my full marathon with no injury and of course,..looking elegant! yayyy! I was wearing Nashata Black Compression Pants.

I finished my 11th Full Marathon with official timing 5 hours and 38 minutes. Although it was not my personal best, I’ve learnt my lessons. It is essential to do Long Slow Distance (LSD), 20km to 30km , a week before the event so that you are prepared physically and mentally.

For the beginners, don’t limit yourself. Only those who risk going too far can possibly find out how far they can go. So, train hard, eat well, hydrate adequately, run at your own pace and enjoy those moments. No matter how slow you are, our destination is still the same, which is the finishing line. 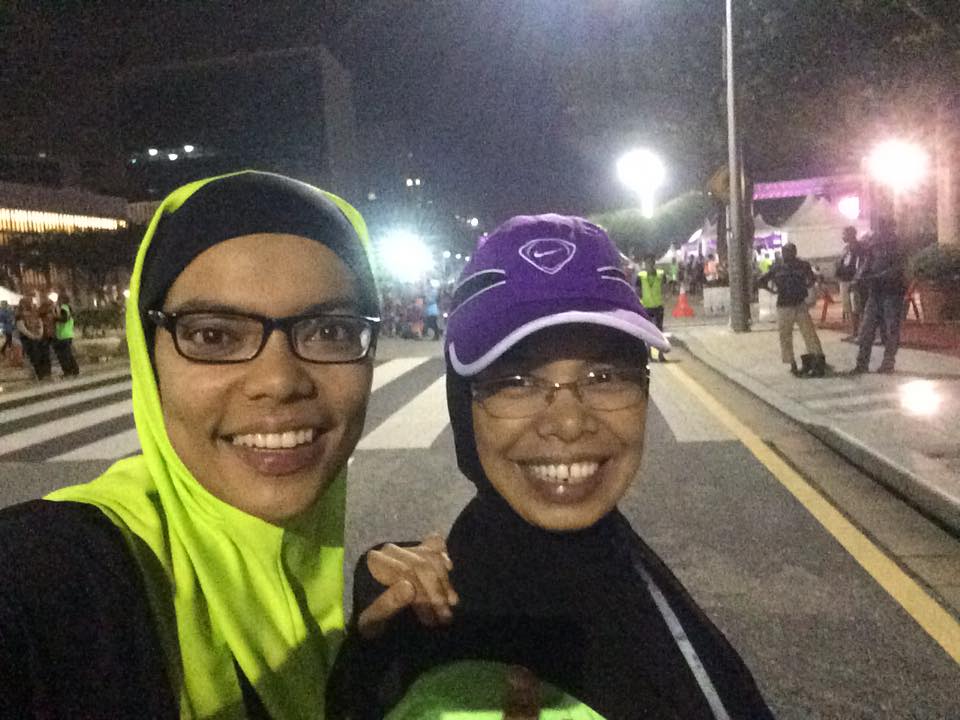 She is in her 50s and she ran 21km that night..Congrats! And she cheered for me at the finishing line 😉 Thank you Opah! Heeee

Till then, keep running and be inspired! предложение по займу