A friend once said “Never trust a runner. If he/she said that we won’t do it again or won’t be running just as fast, you know they are lying”.

I wasn’t lying when I said I was done with loops when I ran my first [incomplete] full marathon. But a few days later I when heard that there will be a female-only ultramarathon, I knew that I just had to sign up for it. Plus, a part of me wanted redemption for not being able to complete a looped full marathon. Initially, I signed up for the 50km solo category, which required me to run 17 loops of 3km (17 X 3KM = 51KM), but as the event date approaches a male friend of mine decided to run with me, so we upgraded to the 100km duo category (each participant will run 50km) because that’s the only category that allows male participants.

My ultramarathon objective is simple: Just finish the race within the cut off time of 9 hours. To be able to do that, I must prepare myself physically and mentally. For first timers like me, it is advisable to clock in at least 200km in one month before the race, and run at least 30-40km one week before race day so your feet is used to moving slowly but consistently over long distances. All of that training will wear you out, you will feel exhausted even before race day! So spend at least 1 week before the race tapering and resting. Most importantly, you have to come to the race mentally prepared. It is going to be hot, at 42°C there is nothing else that keeps you going except your inner motivation. It is going to hurt, but keep telling your mind to fight through the pain. Like 2 straight lines moving together, both mental and physical preparation must be parallel to able to finish an ultramarathon.

My ultramarathon strategy is equally simple too: Run 30KM continuously at a very comfortable pace (8:00 – 8:30 min/km), then power walk (10:30 – 11:30 min/km) for the rest of the way. I was glad that the training paid off. When boredom or negative thoughts started to kick in, I turned up my music or randomly chatted to other participants. There is an encouraging vibe to a women-friendly event, I even made new friends along the way! To avoid wasting precious time, I had to refrain myself from stopping too long at the checkpoint. All I did was quickly drank some water or Coke, refill my bottle, or mix my hydration tab or Gatorade powder, and grab a quick snack, all in less than 3 minutes. 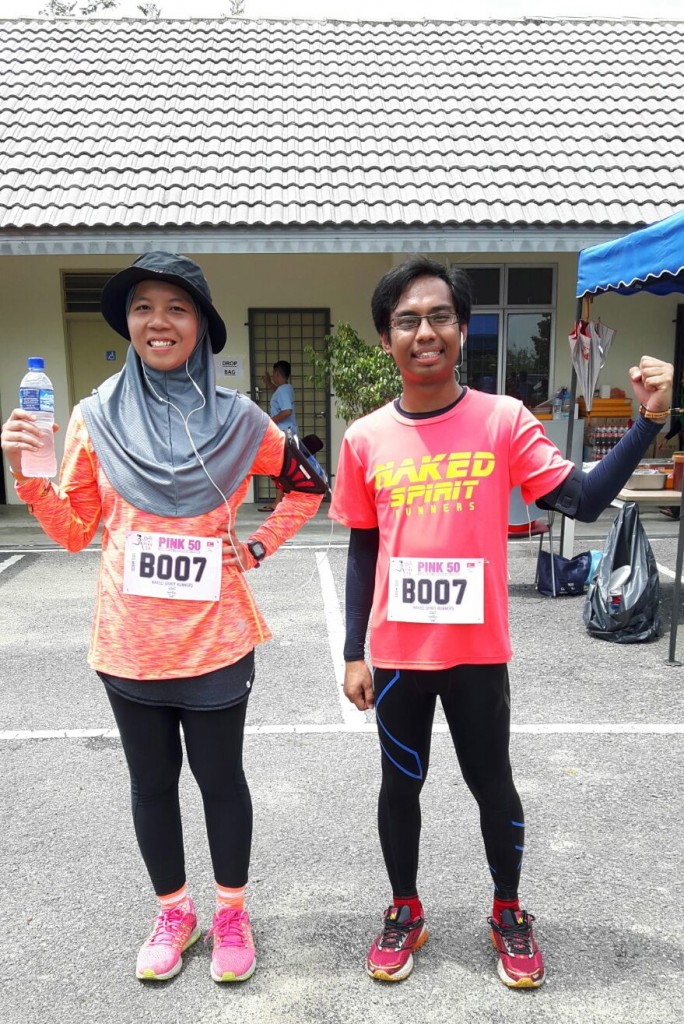 I think my partner’s shirt almost matches my top. True to it’s Ultra name, this top is highly recommended for long distance running. It is bright to minimize heat absorption, evaporates sweat quickly, and very light. 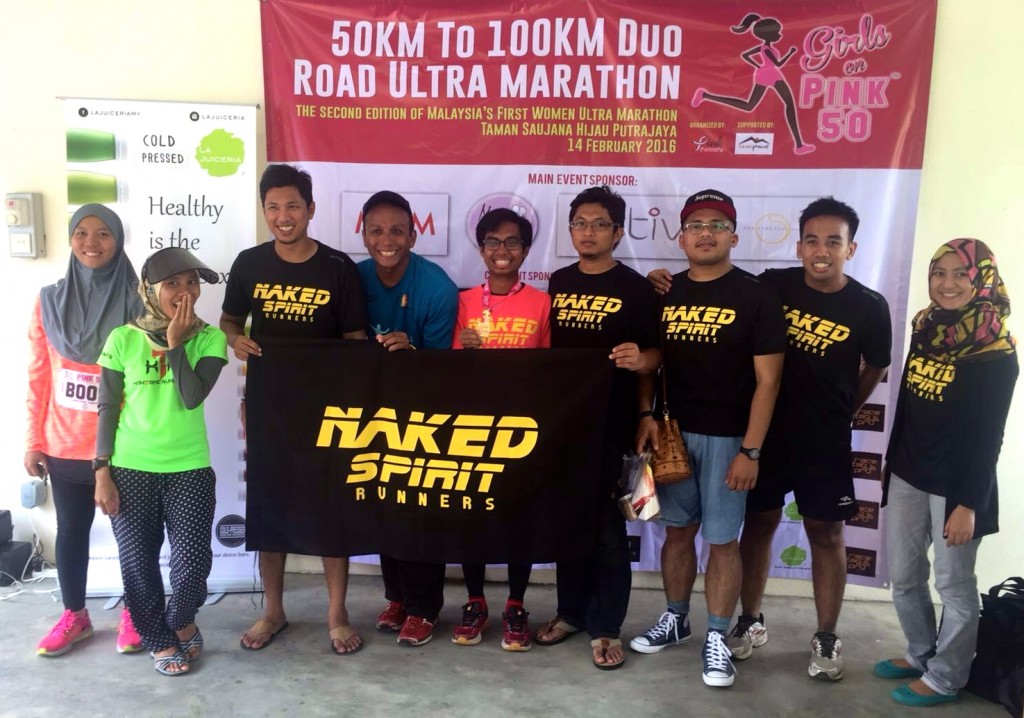 The familiar faces that greeted me at the finishing line. 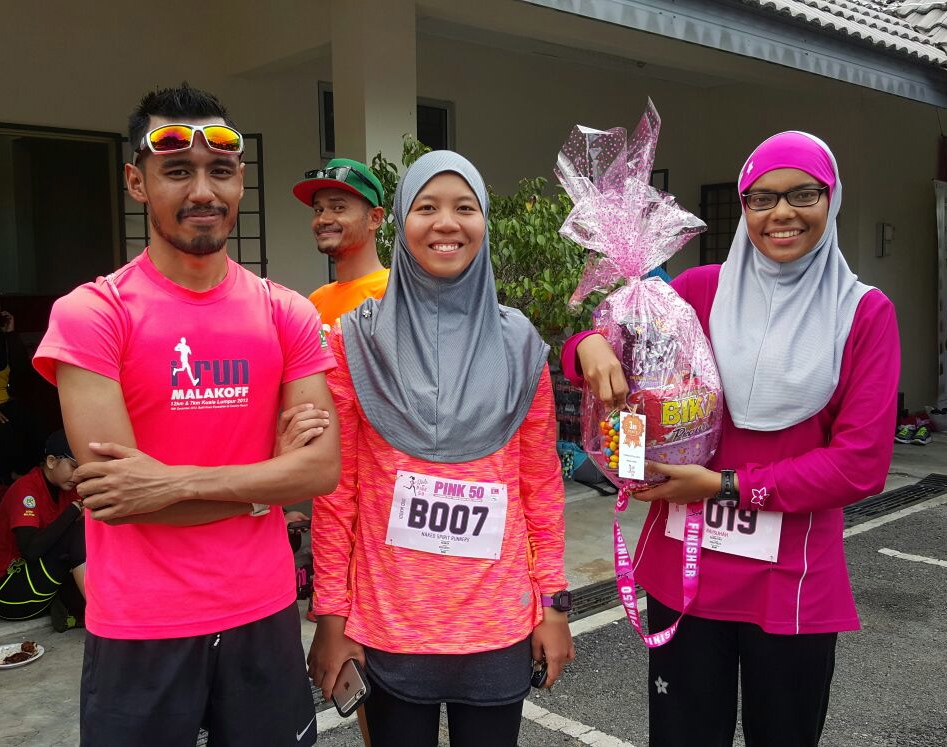 Congratulations for finishing 3rd! You go, girl! Oh and the 2 faces behind me and on my right requires no introduction, right? 🙂 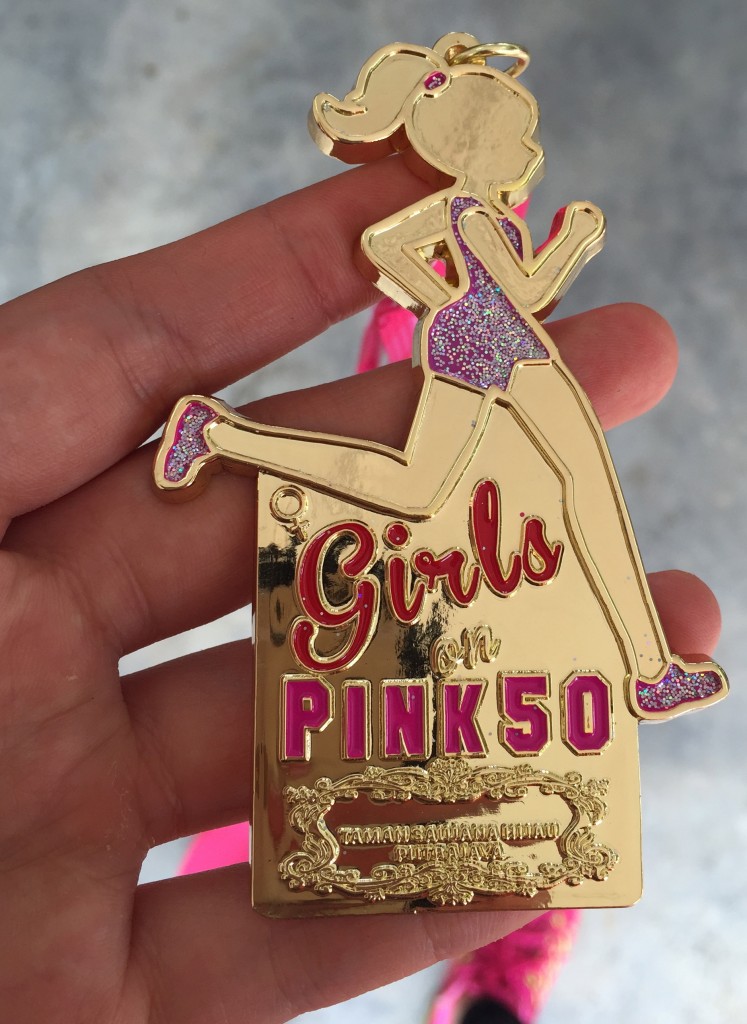 This medal is for my family who have never doubted my capabilities, my official and unofficial pacers during the event, Nashata for always keeping me covered, late night training sessions, pre-dawn LSDs,  support crew for coming to cheer, messages of encouragement, well wishers, and advisors. Thank you for being a part of my ultramarathon journey.

In the end, I completed all 17 loops in under 9 hours, thankfully without any major injuries or cramps. There was the usual muscle fatigue and soreness the next day, but that is normal. I expect to start running again in less than one week, and hopefully I am at least 80% recovered by then. So, what’s next for me? Would I do it all over again if I had to?

Time flies and 3 months after the first 21km run, the wimpy legs ran their first full marathon at the Malaysia Women Marathon (MWM) 2015.

MWM has been close to my heart as it was where I met Intan Suraya in March 2013. I still remember waking up early at 3am and driving to I-City Shah Alam where I was introduced to Intan, a hijabist runner. Eda Fatimawati introduced me to Intan as I wanted to find out how running in hijab was like. Intan was wearing a ‘bawal’ hijab back then and was very happy to share her experience briefly right before she ran the full marathon at MWM.

Later on October 8, 2014, I decided to run Full Marathon at MWM 2015. Although the longest distance I ran at that moment was 10 km, I just signed up for it and worked backwards.

After my first Half Marathon, I was not able to train much as I was busy with work. The longest distance I ran was 17 km on 11th January with Eda and 16 km on the 3rd February. I was supposed to have ran 30 km twice by 15th Feb, but I didn’t. I was far behind with training.

I was added into a running support group managed by MWM and this is what the training plan was like. 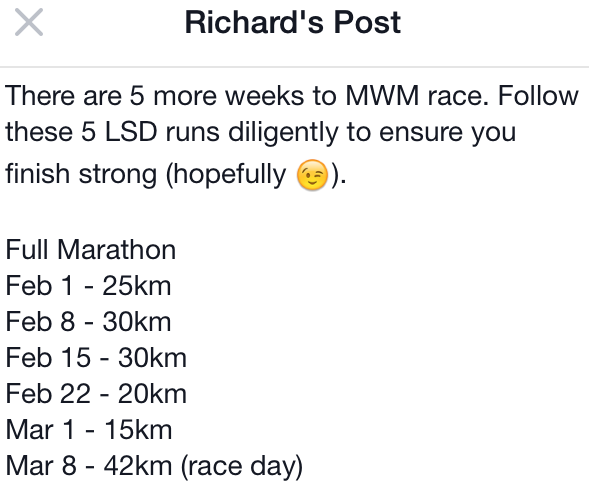 I was only able to collect mileage religiously back again after 16th February. At times, I ran alone at 9 pm and 5am even if I needed to.

Even so, the longest distance I ran was 17 km,  which was on the 28th Feb, a week before MWM 2015. I did not collect enough mileage and was aiming to finish my run within 6 hours. Karen Loh, the MWM Race Director was kind to ask about my progress every week. She reminded me to run 30 km before the full marathon.

Note : Please do not follow my training record. It is not recommended at all. 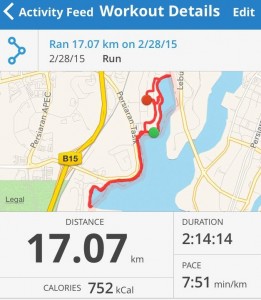 What about my diet?

I was told to drink a lot water until my urine is clear at all times. So I did, with a lot of coke light and coke zero in between (that was not part of the dietary plan).The weather was dry and hot a week before the run, so it was super important to keep my body hydrated. I was told to eat healthy and to eat a lot of carbs a few days before the run. I took a lot of rice, bagels and fruits. I bought a few bagels two days before the run and kept eating them. I felt fat but I guess it was necessary.

Before  the run, I had a bagel and a glass of milk and water. I prepared more food with me, which included hard boil eggs, banana, Yes, it was like preparing for a picnic.

I wanted to run light so I wore my favorite Nashata skirt compression pants, blue ultra top and amin hijab. Initially I planned to bring along a visor as I was worried about the morning sun, but left it behind as i didn’t want to run with too many things with me. I didn’t wear hydration belt either as I was hoping to bump into many many water stations along the way. I brought 2 energy gels in my pocket and my phone (which I initially planned to leave).

The Run, the Race

Intan Suraya, Nur Nahsuhah and I arrived Dataran Merdeka, 5 minutes before flag off. Off my wimpy legs, running the first full marathon. My pace was 7.10 min/km for the first 10 km. The pace dropped to 7.45 min/km at 20 km, and continued to drop to 8 min / km at 28.5km. My challenge started after my pelvic stiffed 30 km onwards. My lower body movement was restricted. I was running non-stop most of the time but could not go fast. Throughout the run, I Dhikr. I was scared and needed help.

One of the marshals told me to drink salt water. Perhaps my body looked stiff. Indeed I drank a lot of salt water after that. I ran without feeling thirsty throughout the run. There were many water stations with choices of water, salt water and revive at all times. After my 21km, I took Revive and salt water at every stop. I consumed the energy gel provided at the water station and another from my pocket at 30 km.

I had no pacer, so I had to push myself as much as I could. I was right behind MWM’s 4 hr 30 mins pacers, then 5 hr and later 5 hr 30 mins pacers. It was at the last 8 km of the run, I could not cope with the pace and ran slowly. Moreover, it was getting hot. Then came the 6 hr pacers over taking me at 37 km. 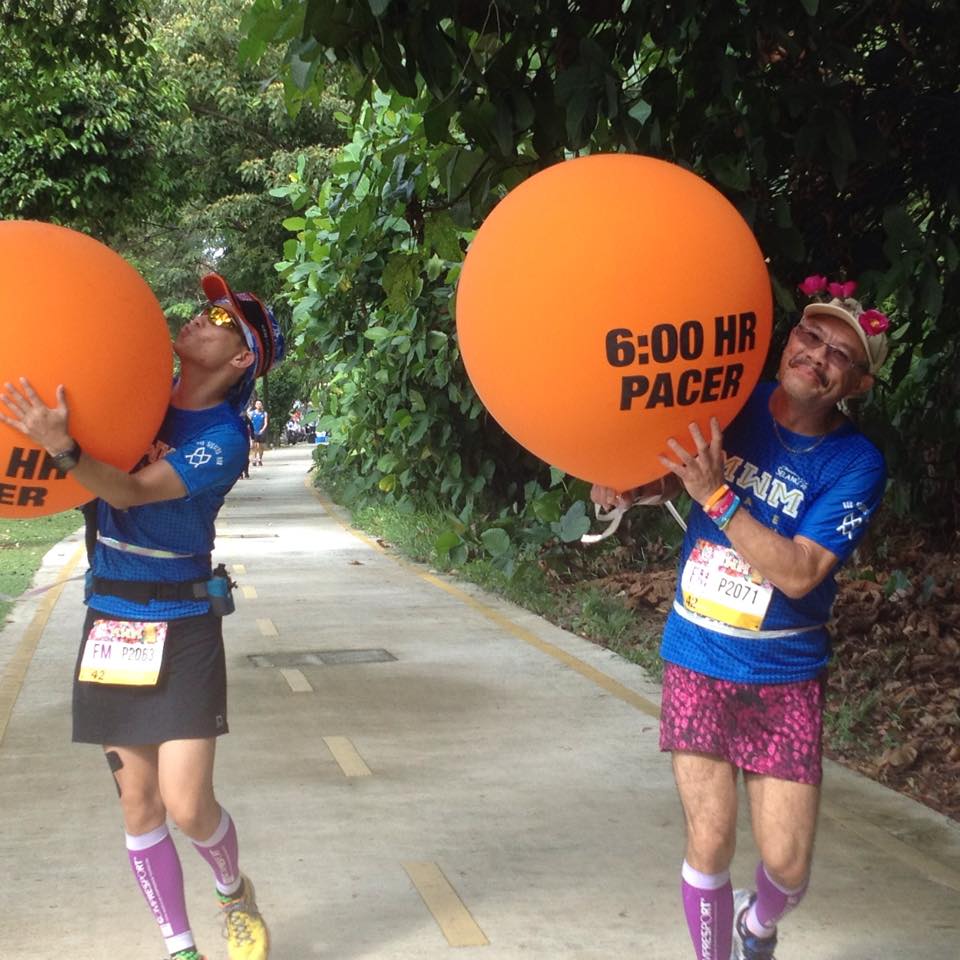 That was when I tried to push harder. It was hard as my pelvic was ‘locked’. I even felt my hands were swinging faster than my legs. It must have looked really funny. At 39 km was when I saw my husband waiting for me by the road. His presence helped me to move faster. 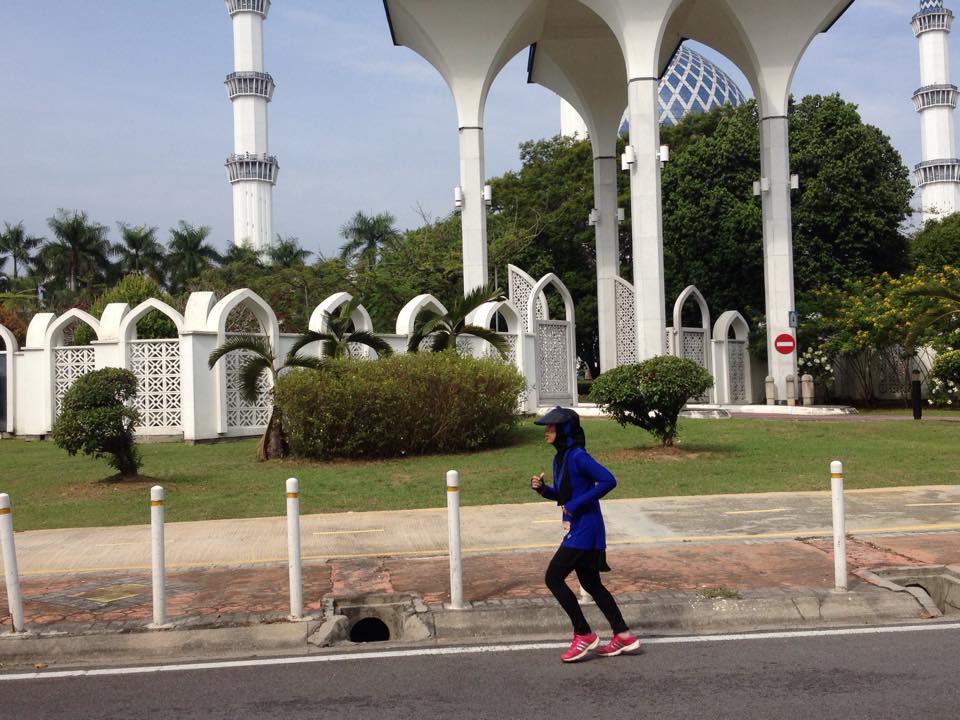 I reached the finishing line at 5 hr 49 mins with no injury. I was happy to see my family members waiting for me for many many hours. My legs are no longer wimpy but my pelvic needs some work. I experienced stiffness around my pelvic area both at half and full marathon. Even though the pain came a lot later at full marathon, but it is an area I need to improve. My overall pace was 8.27 mins/km. 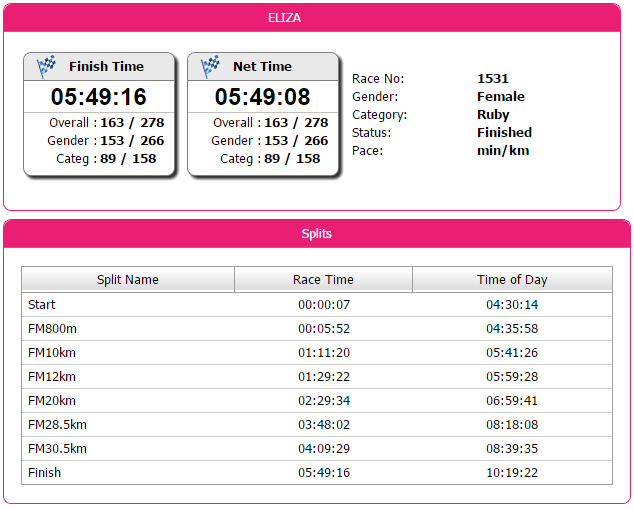 I suffered from zero injury and recovered within a day. It was painless compared to recovery from Mount Kinabalu climb. My legs were a bit sore for a day after the run. I had to stretch out my body for half a day after the run; no twist nor turn as there were also weak. I managed to run 4 km 2 days after MWM and 5 km 4 days after the run, and I was alrite.

Based on Running USA, the average median finishing time for a full marathon for women is 4 hours 41 minutes, while in Asian countries like Malaysia, the median for women, based on the recent Malaysia Women Marathon is higher; 5 hours 40 minutes. Why the big gap ? We will have to find out. The would-be qualifying time for me at the New York Marathon for example is 3 hour 26 mins. My current timing is for age 70 years old and above. 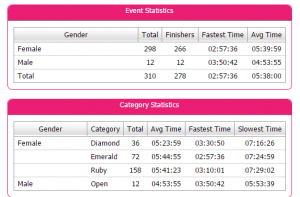 But meanwhile, it was good to see more and more sisters running off late. The recent MWM brought together 298 full marathon runners internationally, mainly from Malaysia. Although there was a drop in terms of participation for full marathon and half marathon this year, we saw new and old faces participating in the run, mostly pushing themselves to tougher categories.

Here’s a picture of very happy runners who completed their full marathon that day. Wimpy legs would definitely run again, but next time around with stronger pelvic and more sisters together! If the wimpy legs can run a full marathon, so can others! 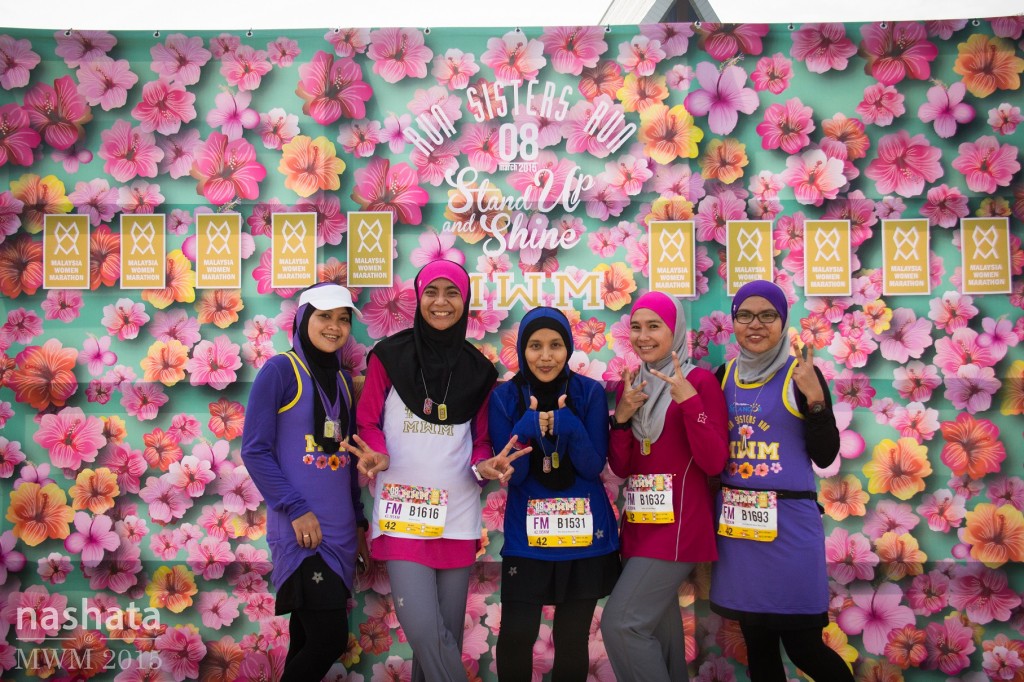 Sisters who ran their first Full Marathon at MWM. (except Intan Suraya who is an avid marathoner)