This International Women’s Day is just the motivation
you need to stay active in the post Covid-19 era as the MCIS Life-Malaysia Women
Marathon 2021 (MLMWM 2021) debuts with a difference.

Aligned with the latest social distancing SOPs, the event is expected to draw over 2,000
runners, joggers, walkers and cyclists, who would be clocking in their distance covered
with the help of various digital health applications and devices.

“We’ve had a lot of request from the public and the fan base of MWM which is South
East Asia’s only women’s marathon, to keep the show running this year. After detailed
discussions with the organisers of MWM, we have decided to proceed by allowing all
participants to run, walk, jog or cycle indoors or outdoors, in their own venues and
submit their results to us electronically,” explained Prasheem Seebran, CEO and
Managing Director of MCIS Life.

“Our event has its history tied back to the cause of raising awareness around women
empowerment and other associated challenges faced by women. We didn’t want to
miss the opportunity of celebrating this year’s International Women’s Day which carries
the theme #ChooseToChallenge with a difference.

“Being the only women’s marathon in South East Asia, our first event this year goes
virtual, provides various distance options, categories and even welcomes cyclists to our
growing family. With this, we’re hoping women, men and children aged above 15 join us
in a fun filled month long event to stay fit and active in accordance with the prevailing
SOPs,” added Karen Loh, founder of MWM.

Into the second year as the title sponsor, MCIS Life has worked behind the scene with
MWM to offer the following options for those keen on registering for the event this time:
 One-month timeline to complete the distance chosen: 8 March – 8 April 2021
 4 distance options for runners, walkers & joggers to choose from: 50km, 100km,
150 km or 250km
 Cyclists are required to clock in 400km to complete the challenge An elite level is available for those attempting to run a full or half marathon in a
single attempt

As is the tradition every year, the event will feature various other attractions including
exciting contests, opportunity to raise funds for a community cause, live talks on issues
relevant to community well-being as well as efforts to bring to light achievements of
notable women entrepreneurs, professionals and health enthusiasts.
For more information on discounts for registration as well as details of the race, please
visit the social media pages of MCIS Life and MWM.

The Malaysia Women Marathon (MWM) is a yearly running event that happens on International Women’s Day. It’s 8th version in 2020 and it was called off three days before the race day due to the coronavirus (COVID19). Many got upset about the last minute decision by the organiser and sponsor. The run was called off when the exhibitors and sponsors were already on race village to set up. The MWM was not the only race that got cancelled or postponed. However, other runs in Klang Valley went ahead on the same day -> Malaysia Youth Run 2020 & Kuala Lumpur City Day Half Marathon 2020.

Despite the cancellation, the three day expo continued at Padang Timur of Petaling Jaya. Runners came to pick up their race kits and finisher items as promised by the organiser. I was not able to go and got someone to pick up mine. I opened the race pack the day after the race day just to find the shirt I ordered was the wrong type and the finisher buff missing. This was not the first time such thing happen. A friend who ran the half marathon last year was not given the finisher buff too. I checked the event facebook page and saw many angry comments about not receiving 5km medals, even on the last date. 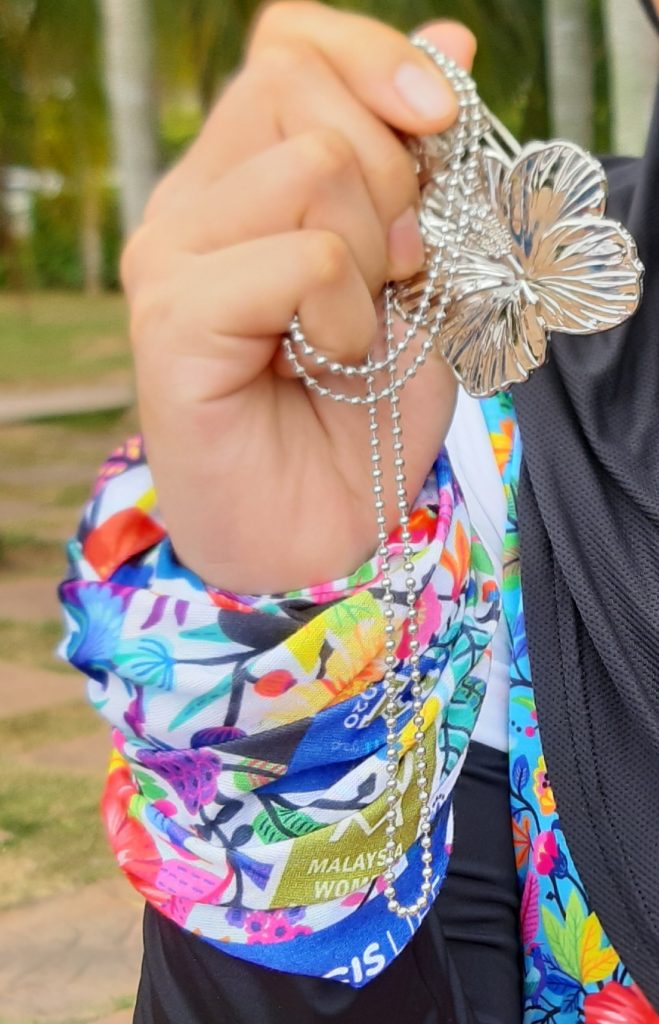 I committed to run the half marathon and raise funds for the Malaysia Rare Disease Society. I had obligations to keep to my words, especially towards donors who collectively contributed RM1,140 to the cause. I just had to run. I knew many wanted to run too. After all, it is a good practice to earn the medal. So, I put up a post on my instagram, inviting others and Nashata Runners to join me. 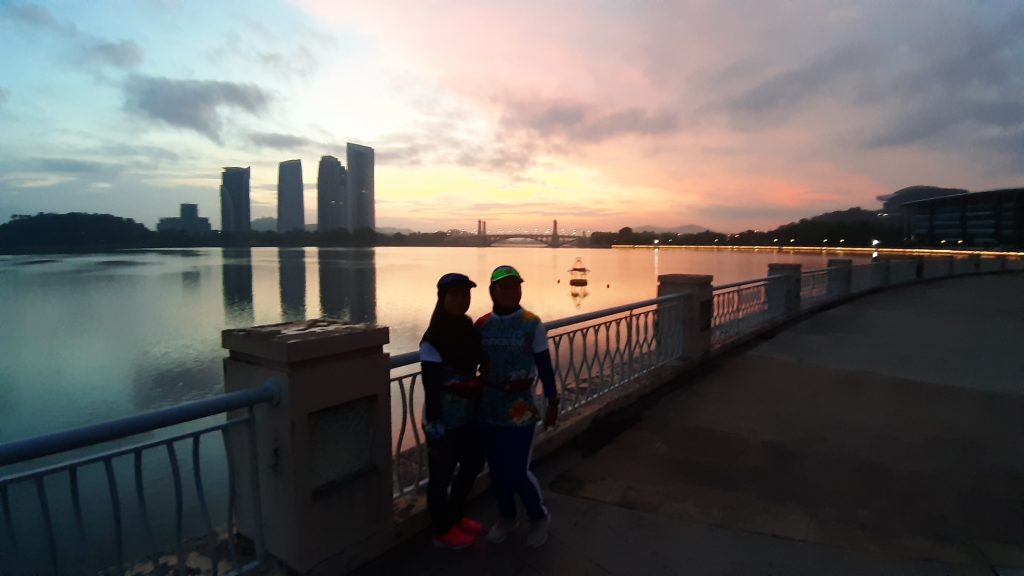 The morning twilight by Putrajaya Lakeside

A few wanted to join but a couple of turned up to run on International Women’s Day. It was a 8 km loop around the Putrajaya Lake starting from Perdana Lake Jogging Track . It was a safe and scenic route, with a couple of public toilets along the way. I brought some water, coconut water, energy bars and mars chocolate and left them at the gazebo where we started (at the Perdana Lake Jogging Track). Below was the route. 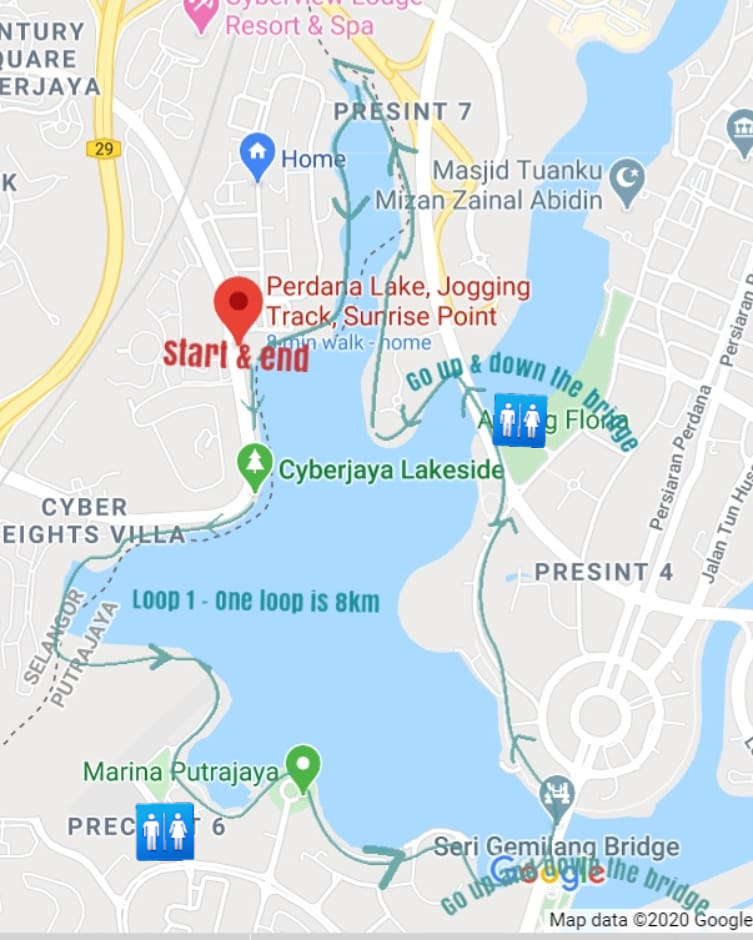 We started running at 6:40am and finished when the sun was scorching hot. The first loop with Farhani and Farhati was easy and breezy, while the second loop after the 15km mark was a bit hard for both of us due to the heat. We stopped after the first loop to replenish and ran slowly until we finished the second loop under 3 hours.

Throughout the run, we bumped into other MWM runners, some solo and some in a group of two. All of them ran in a great spirit of International Women’s Day! 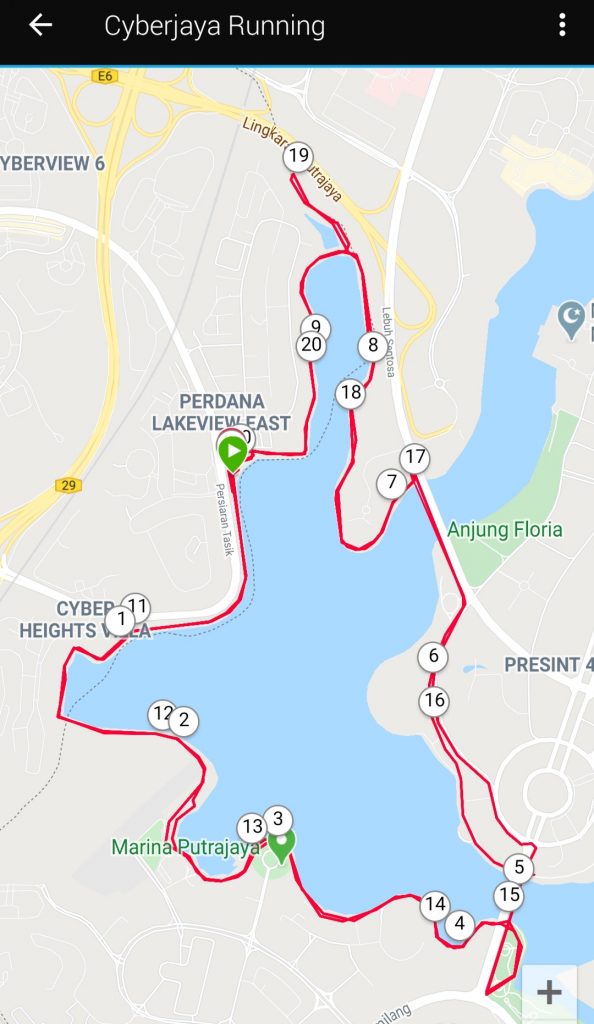 Half marathon  route from Perdana Lake Jogging Track. It is a loop of about 10km each. We made 2 loops to achieve 21km

Now, I feel I do not need to run in races. Having a bigger cause, like raising funds for special need groups make running more meaningful. After all, with availability of public toilets, GPS/Running watches and running companions you can just train frequently and run with your friends. If I want to push the envelope, I would just join major and well-managed marathons for a good experience! 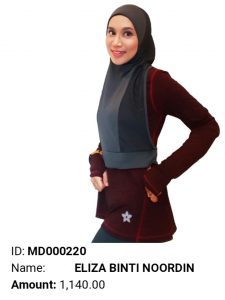 Happy International Women’s Day! #EachforEqual. To me, every women is strong and beautiful. It is a day for us to celebrate. Here’s sending lotsa love ♥♥♥ to the ladies out there. 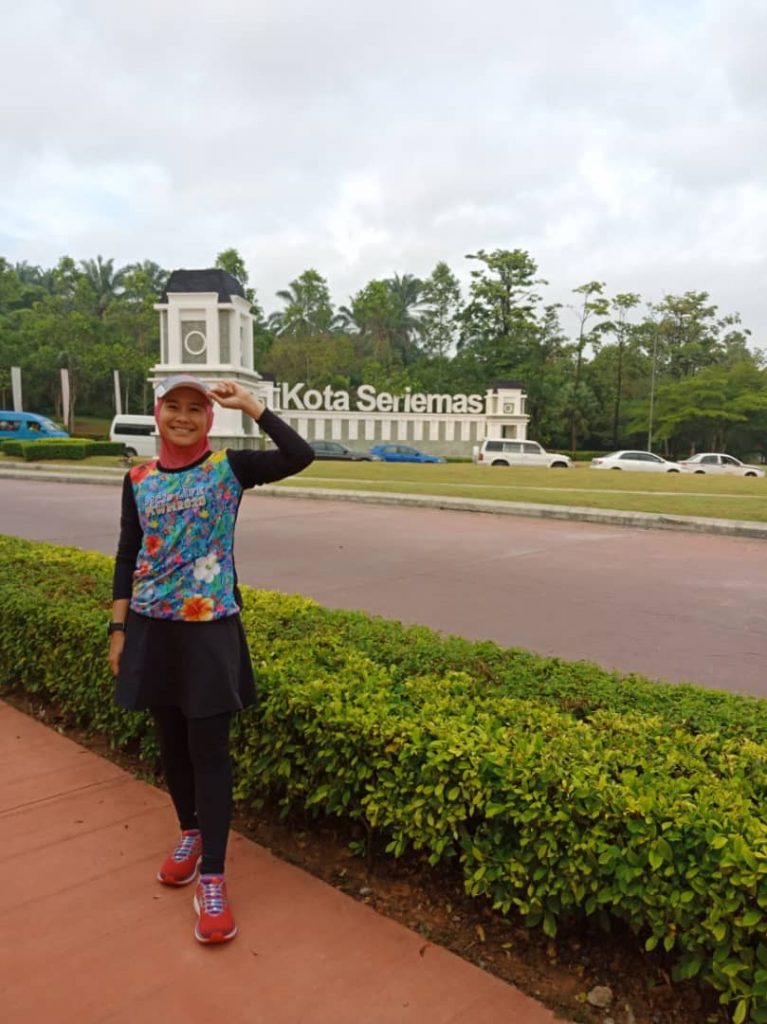 The runners made the best of the day, no matter where we were. Intan ran 15km in Nilai on International Women’s Day.

Take advantage of Nashata RM20/USD5/SGD3.5 voucher valid until 11 March when you purchase more than RM100/USD25/ worth of items at nashata.com. Use vouchercode EachforEqual. 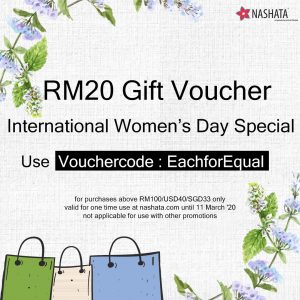 We celebrate the glory of womanhood everyday. But every year on the 8th March, we celebrate the International Women’s Day. In Malaysia, we celebrate fitness for woman at the Malaysia Women Marathon on the 6th March 2016. There is also Penang Zumba Carnival 2016 happening a day earlier, 5th March 2016, at the Stadium Batu Kawan, Penang.

In supporting the International Women’s Day, here’s what the people at Nashata are going to do:

At the store front, we are offering ultra products for fit ladies up to 50% discount. This includes the heather tops, mumtaz hijab and amin extended hijab. The special prices are valid from now until 13th March 2016. Also available at MWM Expo on the 4th & 5th March at Rimbayu.

Here are some suggested tops that go well with the MWM running tee. 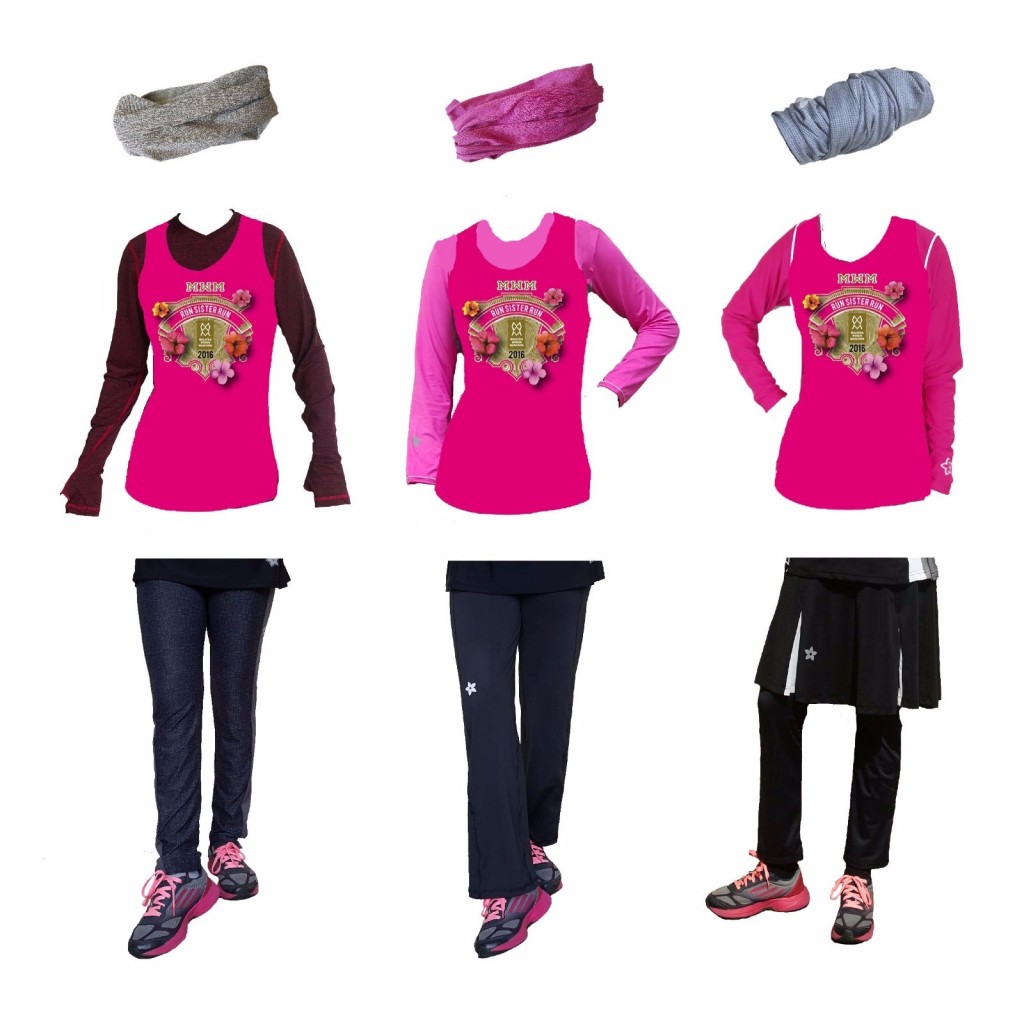 Mix and Match : Run in Style

2. OUR PLEDGE : To Help Women Achieve Their Fitness Goals

This year we are sponsoring 8 runners from Malaysia & Singapore to run the Full Marathon (42 km) at MWM. These are ladies and pacer from various backgrounds and ages but with a common determination to run. Here are the reasons why running a full marathon is important to these awesome runners and how running has helped them in their career and daily life. 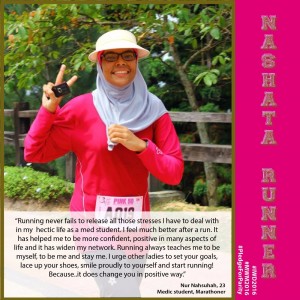 Nashata will be at the MWM Expo 4-5th March. Come look for us at Rimbayu.

At 2:15pm, 4th March we are having a 30 mins Fashion Tips specially for Sports Fashionista at the MWM Expo. We will share about how to dress comfortably yet flattering enough for you to run marathon confidently. Other than that we will be sharing some tips on how to pose and look good for photoshoots while running. Intan Suraya who will be running at the MWM always look good in front of the camera. Find out how she does it! 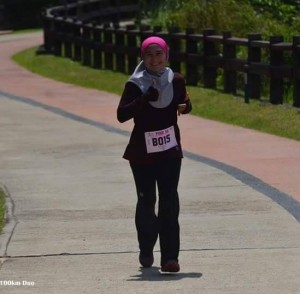