Are you a fan of colors? If you are, then I hope you managed to attend The Color Run last Sunday (13 August) at Padang Merbok, Kuala Lumpur.

If you’ve never heard of The Color Run, it’s a run where fist-full of colors would be thrown at you throughout the whole 5 kilometres. It first began in Phoenix, Arizona five years ago and slowly expanded across the globe.

The race kit was collected at eCurve, Mutiara Damansara the week before. Needless to say, they were pretty cool. The white t-shirt was a soft cotton fabric, unlike most of the other t-shirts I own. There were a few other things too, including a goodie bag and a headband with the words “THE COLOR RUN” printed in bright yellow. 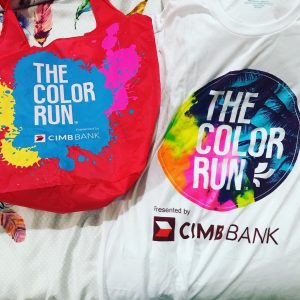 Race kit – a white t-shirt for colors to be thrown at and a goodie bag containing facial products, sticker tattoos, and a headband.

On the event day, I got up at 5:40 a.m. and made my way (with my uncle) to the designated location. The sky was still dark, and the roads were exceptionally empty. Without the usual heavy traffic present during the day, it took a short 30 minutes to get there.

Upon arriving the field (Padang Merbok means Merbok Field, so the event was set up on a field), we were astonished to see the wave of people in identical white t-shirts. There were at least 500 people warming up, lead by the event hosts who were already onstage with two unicorns dancing about. 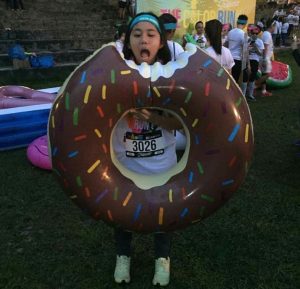 Took a bite of a giant doughnut before the run.

After a few stretches here and there, we were lead into a pathway towards the starting line like a massive herd of sheep plus we were all wearing white, so we were all human sheep. There were at least three drones flying high up above our heads, recording the whole thing.

Participants were released in waves, each one starting off with a sprinkle of color over their heads. We were the lucky enough to be at the second wave, which started a little after 7:15 a.m. Participants who started later had to run under the eight to nine o’clock sun.

It was a cool and lovely run, thanks to the ample shade the tall trees provided for us. It was like running in a forest. At first, we thought there would be color stations every kilometre, which should add up to five stations. To our surprise, the distance between the first station and the second was less than a kilometre, probably as short as 500 metres.

The first station threw yellow, green, and purple at us. I was lucky my aunt advised us to bring a scarf or a cloth to cover our faces while running through the stations beforehand. The colors were made of powder, in which the event crew threw fist-full of colored powder at us. Since they were made of powder, it caused irritation to the eyes and the mouth. There were a few times where we ran past families, their young children complaining of the powder in their eyes or their color powdered shoes.

After running blindly through stations of blue, orange, neon green, and red, we reached the finish line at 8:30 a.m., our clothes and hair stained with color. At the finishing line, we were given a packet of colored powder each, including a bottle of water and a can of energy drink. 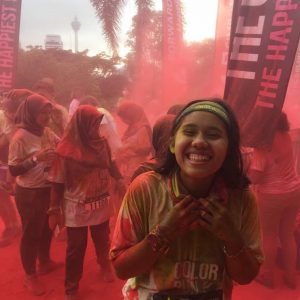 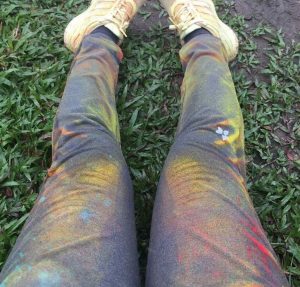 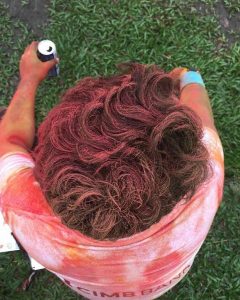 My uncle’s red mane after the run.

Overall, it was a fantastic event. Though it wasn’t your typical run-and-go marathon, it was definitely a fun run. Not recommended for children 10 and below because they may not be able to handle the irritation. If you’re in Rhode Island or Portland (and many more places in the United States and around the world), you still have a chance to participate in the fun. Who knows, maybe you’ll join the run next year.